Hercules fighting against the Centaurs 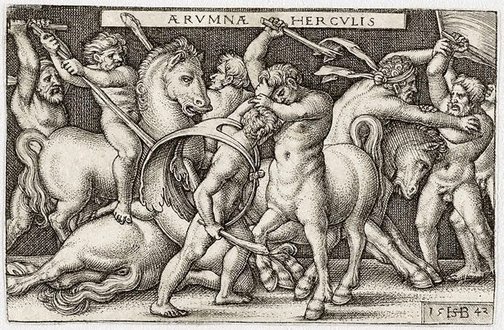 Beham was one of the Little Masters, a small band of Nuremberg artists who came under the influence of Dürer. Their engravings are tiny yet exquisitely crafted and finely detailed. The subject-matter derives from the twelve labours of Hercules. During the fourth labour Hercules visits the centaur Pholus, who had been given a cask of wine by Dionysus. Against Pholus’s wishes, Hercules opens the cask. The scent of the wine sends the centaurs into a frenzy and they attack Hercules. In this print, the hero receives assistance from other men, a detail of Beham’s own invention.

Browse other works by Hans Beham