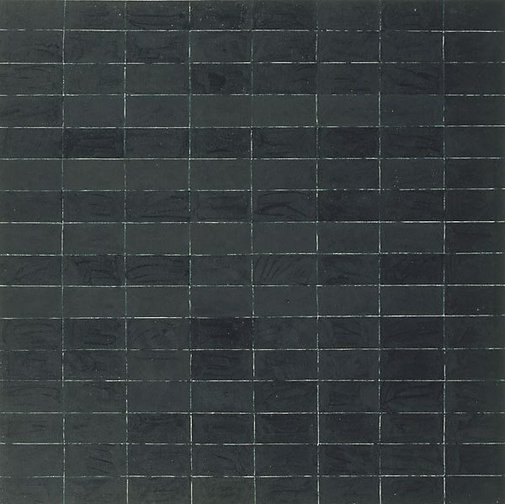 'Knave paltry and poghuing picked green' dates from the period Robert Jacks spent in New York from 1969 to 1978. The grid dominated Jacks's mixed media sculptures, stamp books and paintings throughout the 1970s, although it had featured in his work from as early as the mid 1960s.
Jacks's 'Knave paltry and poghuing picked green' expanded upon the rigidity of this minimalist archetype by creating - in a post-minimal manner - a painterly picture that undermines the order of its composition.

This work is strikingly similar to 'Untitled (the black window)' 1972, a painting within the collection of the National Gallery of Victoria. In fact Jacks reworked this particular format (16 by 8 units) in different permutations of colour and tone in 1973. We can therefore situate these examples within Jacks's broader conceptual enterprise of exploring process and variation within his practice.

'Knave paltry and poghuing picked gree'n was among the first group of paintings to be exhibited back in Australia following Jacks's departure in 1968. It was shown in the exhibition 'Recent Australian art' at the Art Gallery of New South Wales in 1973.

Browse other works by Robert Jacks