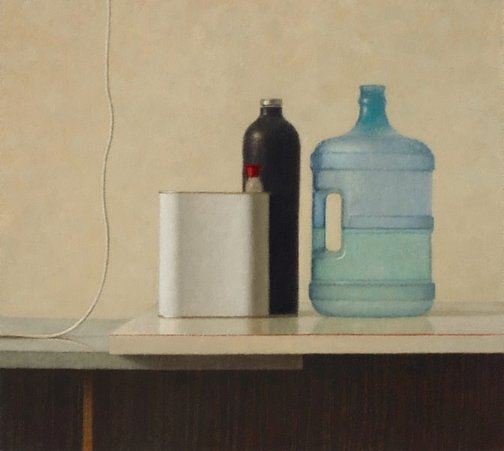 Since the late 1990s, the focus of Jude Rae's practice has been a consistent investigation into the genre of still life painting, characterised by an impassive and minimal, realist aesthetic.

Rae's skilful evocation of the volume, weight and tactility of her modelled forms sits in tension with the flatness of the picture plane. In spite of their tranquil composure, her paintings capture a dynamic moment of perceptual uncertainty, where subjects jostle to register with the viewer as either material object or image. In this sense, her works are equally engaged with the embodied experience of looking as they are with the artifice of representation.

The objects that Rae represents are more often than not a departure from the familiar domestic vessels and decorative arrangements that dominate the still life genre. The proposed work 'SL 266' exemplifies this approach. The austere composition features a white industrial oil can, behind which sits a black gas canister adjacent to a clear plastic water-cooler bottle that is partially filled. Next to this configuration, a single white electrical cable drops from an unseen anchor above and arcs out of the left hand side of the image.

Rae's juxtaposition of these objects amplifies their simple and unassuming character while also destabilising their spatial and material relation to one another. The eye flickers restlessly across surfaces that vary from opaque to transparent, curvaceous to flat, pliable to hard, and shiny to matte, in the process dissolving any sense of visual certainty. Even the support for these objects is elusive: a shelf balanced upon another flat surface, which is propped up by only one vertical support, implying the objects are somehow both heavy and weightless.

The impact of Rae's still lifes derives from the quiet yet insistent way in which they prompt the viewer to look again and more closely, subtly disrupting the assumptions formed upon first encountering her images. More than simply striking depictions of unlikely objects, they are studies in sensory apprehension, and in this regard Rae sees them as "providing an echo of the complexities and strangeness we edit out of daily life, the flesh and bones of the visual world that we ignore of necessity".

Browse other works by Jude Rae