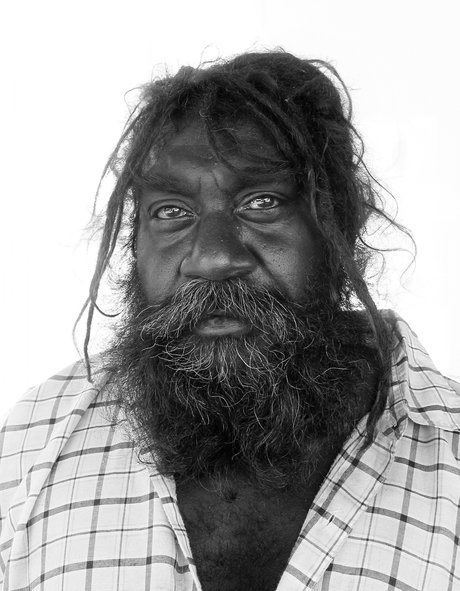 Owen Yalandja, like his brother Crusoe Kurddal, maintains his father Crusoe Kuningbal’s patrimony of artistic inspiration in wood carving. Yalandja lives at Barrihdjowkkeng outstation, a camp established by his father and adjacent to a billabong that is a Yirridjdja moiety sacred site for the yawkyawk or young girl spirits. Yawkyawk live in this billabong and their shadows can occasionally be seen as they flee the smell of humans who approach the water. They are imagined to have been girls who transformed into mermaid-like figures with fish tails. While many bark painters in the region have depicted yawkyawk, Yalandja has developed the mimih form created by his father to create his own new form of carving, as in Yawkyawk, 1999. One innovative work from 1993 makes use of a natural fork in a tree to create the tail of a mermaid figure. More recently, Yalandja’s sculptures have torsos that are much like that of the standard mimih, but with a tapering lower body and forked fish tail. Yalandja also asserts his unique approach by using a black background, as well as the more common red background to these figures. In the early 1990s, he experimented with the dot patterns his father taught him, and created new arrangements – first in arcs to suggest scales, and later, small ‘v’ shaped marks to suggest individual scales. He uses this graphic innovation to capture the scaly sheen of the watery being.

Yalandja now specialises in producing larger fine art pieces. He favours the wood of the kurrajong tree for carving because it has good strength across the grain, allowing him to incorporate three-dimensional carved elements without the concern that the trunk will split. Yalandja’s recent innovations include the selection of more curvilinear tree trunks to give his figures a sinuous appearance. Very thin and waving trunks provide an even more attenuated form. These innovations in three-dimensional form are appropriate to the meaning of the figure, capturing as they do the sinuous movements of the yawkyawk’s swimming form.

Other works by Owen Yalandja