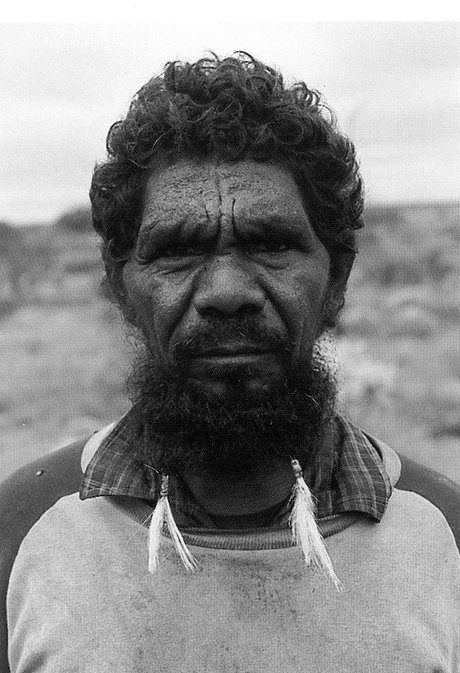 Timmy Payungka Tjapangati was among the first Pintupi men to begin painting on hardboard at Papunya in 1971. He had lived in his traditional country in
the Gibson Desert to the west of the Wilkinkarra (Lake Mackay) saltpan before the drought of the late 1950s forced him and his family to walk to the distant ration station at Ikuntji (Haasts Bluff). After a short stay he returned to his country, where he contacted the government patrol officer Jeremy Long, with whom he returned east to the new government settlement at Papunya.

Tjapangati was working on the farm at Papunya when he and other Pintupi men took up the brush. In the late 1970s he spent much of his time with his relatives at Balgo Mission, to the north-west of Papunya, and did not paint for the market for extended periods. Tjapangati was a vital force behind the eventual return of the Pintupi to their traditional country of Kiwirrkura in the mid-1980s. At this time, he also became a key guardian for the ‘new people’, a group of nine Pintupi who had stayed isolated in the Gibson Desert for over 20 years, only making contact with their relatives again after seeing the smoke from their distant hunting fires.

Tjapangati was a highly individual painter among the Pintupi artists – figuration played a large part in his earlier works, with depictions of animals and people, their tracks and associated ceremonial detail. In the middle phase of his artistic development, while conforming to Pintupi conventions, his painting was character-ised by compositional complexity and the use of unconventional chromatic and tonal arrangements.

The latter phase of his work is an assertion of his undoubted ceremonial authority. In Tingari cycle at Wilkinkarra, 1996, Tjapangati fills the picture space with the intricate ‘key’ patterns that are characteristically incised onto wooden objects associated with secret ceremonies, and the palette is reduced to a red ochre undercoat covered by a maze of black and white dotted lines. Untitled, 1998, is a similarly reductive work. It employs squared concentric elements, of a kind of geometry that had been eschewed by Pintupi artists in the 1970s and 1980s because it referred too closely to the secret patterns of the men’s realm. In this work the squared elements are arranged in an informal grid. At the upper left of the work, just one square is left unfilled, begging us to question whether this was deliberate: its effect is of total visual power.