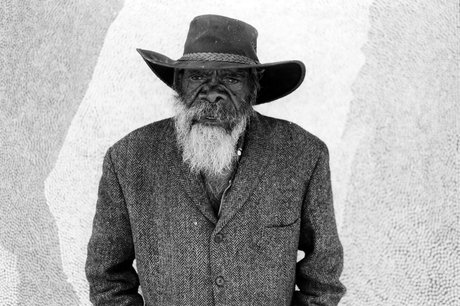 Mick Namarari Tjapaltjarri was one of the founding artists at Papunya in 1971. As a boy, following the death by spearing of his father and his mother’s resulting suicide, he fled the desert, east to the safety of the Lutheran Hermannsburg Mission. Here he would have been aware of Albert Namatjira and his fellow Western Aranda landscape painters. While still a young man, Namarari worked on cattle stations and became familiar with non-Aboriginal people, such as ‘Billy the Bunyip’ MacNamara, from whom he took his (Aboriginalised) name, ‘Namarari’. These life experiences, together with the observational skill associated with his extraordinary bushmanship, prepared him for his second career as an artist.

Namarari was a quiet and relatively inconspicuous character, often over-shadowed by the more showy and dominant artists at Papunya. However, he painted assiduously for more than 25 years, building an oeuvre that is characterised by lightness of line and subtlety of tone. While many of his peers painted according to stylised conventions, Namarari’s work is distinguished by an extraordinary range of visual inventions. In his first couple of years of painting, he explored figuration, giving the same weight to his depiction of ceremonial performers as to details of the ceremonial ground paintings and associated sacred objects. During the same period he created hypnotic depictions of his birth-place, Marnpi, using white pulsing lines to draw the eye into the vortex of an ancestral wind at the site. From the mid-1970s, he occasionally explored minimal representation, focusing on one tiny aspect of the activities of an ancestor; surprisingly, he would then change resolution in the next work, describing the topography of a much larger area. Despite his apparent reserve, the breadth and scope of his inventions over such a long period make him the most consistently brilliant of the Papunya Tula artists.

Namarari’s paintings – Untitled (Dingo dreaming at Nyunmanu), 1997, and Untitled (Tjunginpa mouse dreaming), 1998 – were both created at the climax of his career, and depict in turn a detail of the ancestral activities of the Dingo and the Tjunginpa Tjukurrpa to create mesmerising visual rhythms. Both works exhibit Namarari’s clarity of artistic conception and consistency of application, aspects of his work that have remained constant throughout his career and enabled him to continually improvise and expand his repertoire.

Other works by Mick Namarari Tjapaltjarri