Clifford Possum Tjapaltjarri was born on Napperby Station about 200 kilometres north-west of Mparntwe (Alice Springs). Like many other Anmatyerr people, his family moved to the east region of their country following the Coniston Massacre of the mid-1920s. Tjapaltjarri’s mother also raised Billy Stockman Tjapaltjarri, whose own mother was a victim of the massacre. Clifford Possum Tjapaltjarri started his working life at diverse stations across Central Australia, where he acquired his impressive linguistic repertoire of six Western Desert languages, including his native Anmatyerr, and a ‘little bit English’. He refined his skill as a woodcarver while continuing to work as a stockman.

Tjapaltjarri joined Papunya Tula Artists in February 1972 and was one of their founding directors. He rapidly distinguished himself as one of the company’s most accomplished and inventive artists, an exponent of striking, multi-layered and meticulously rendered visual effects. He was chosen by Papunya Tula Artists to paint, with his brother Tim Leura Tjapaltjarri, the large canvas that became Warlugulong, 1976, for a BBC documentary, Desert Dreamers. The painting exceeded in size and narrative complexity anything hitherto produced by the Papunya painters. Its striking central fireburst depicts the Fire Dreaming site where Clifford Possum Tjapaltjarri’s mother, Long Rose Nangala, was born. Warlugulong was one of the high points in the two brothers’ artistic collaboration over the years, and also the first in Clifford Possum Tjapaltjarri’s renowned series of monumental canvases of the late 1970s, which have been likened to vast encyclo-pedic ‘maps’ of his Tjukurrpa country.

Tjapaltjarri was chairperson of Papunya Tula Artists during the early 1980s. In 1988, the Institute of Contemporary Art in London organised a retrospective – it was Tjapaltjarri’s first solo exhibition and the first time an Australian Aboriginal artist had been honoured in this way by the international art world. Over the next decade he would become the most widely travelled Aboriginal artist of his generation and an ambassador for Aboriginal art around the world.

In 2002 Clifford Possum Tjapaltjarri was appointed an Officer of the Order of Australia ‘ … for service as a contributor to and pioneer of the development of the Western Desert art movement, and to the Indigenous community through interpretation of ancient traditions and cultural values.’ 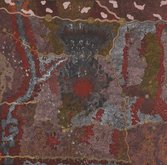