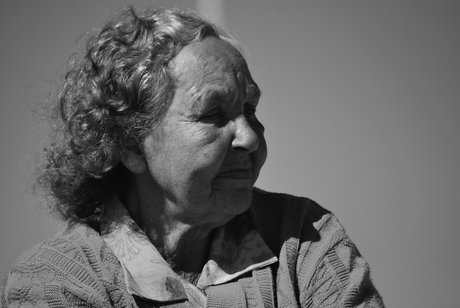 Bidjigal artist and elder Esme Timbery comes from a long line of shell workers from the Aboriginal mission community of La Perouse in Sydney. La Perouse Aboriginal Mission, on the shores of Botany Bay, was officially gazetted as an Aboriginal reserve in 1895, and became one of the first government-sanctioned missions designed to segregate Aboriginal people from mainstream Australia. La Perouse women artists have been working with and earning an income from shell work for generations, with one of the earliest reports from the late 1800s. The work of Queen Emma Timbery, an important community leader and Timbery’s great-grandmother, was exhibited and collected in London in 1910. During the 1950s and 1960s, the women exhibited their works at the NSW Royal Easter Show and at markets, fairs and department stalls alongside the carved and designed boomerangs, shields and clubs by the men.

Esme Timbery and her late sister Rose Timbery, like most shell artists, learnt shell work as young girls from their mothers, grandmothers and aunts by first sorting the shells by type, size and colour. In the 1940s they joined the shell-working network and started selling their work.

Although shells have been used by coastal Aboriginal communities for countless generations for tools, including fish hooks, and employed to created jewellery, using shells to create contemporary shell artwork was first encouraged by the missionaries, who endorsed the collection of shells and production of shell work. Families from La Perouse would take regular shell-collecting trips to the local beaches throughout their traditional lands. While shell art wasn’t considered ‘traditional’ cultural practice, this continuation of traditional knowledge of country enabled artists to maintain the skills at harvesting particular shells at specific beaches and bays during different seasons and environmental events.

Some of the standard shell work includes boxes, ornamental booties or small slippers, and frames. Within Timbery’s life, the famed subject of the Sydney Harbour Bridge has become a popular subject, as seen in the historical work by an unknown artist in the Art Gallery of New South Wales’s collection. Timbery, like other La Perouse shell artists, sculpts cardboard bases – which are often family templates – as a foundation. These forms are then covered in material and shelled, and in some cases topped with glitter. The designs and patterns created using different types of shells and layouts are inherited and continued, with individual family styles recognised and understood.

In 2005 she became the inaugural winner of the Parliament of New South Wales Indigenous Art Prize, with two shelled bridges. Working with this icon of Sydney, Timbery and others re-craft the country’s history. The subjects and objects embraced by the La Perouse artists speak to the region’s cultural realities and connection to country: the Sydney Harbour Bridge represents Aboriginal peoples’ ability to transcend boundaries, and its shelled manifestation provides a richer, alternative understanding of the Sydney landscape.

Other works by Esme Timbery