Jeffrey Smart is acclaimed for his precisely delineated urban and industrial landscapes. Having absorbed the influences of Australian modernism in the 1940s, he worked in a distinctive, highly finished and detailed style.

Smart spent most of his working life in Italy but continued to exhibit in Australia where he enjoyed popular and critical success. His paintings are held in major collections in Australia and overseas including the Metropolitan Museum of Art, New York.

Smart was born in Adelaide in 1921. In the late 1930s he studied part-time at the South Australian School of Arts and Crafts under Marie Tuck and Rupert Bunny while also training at Adelaide Teachers College from 1939 to 1941. He visited the studio of the pioneering modernist painter and printmaker Dorrit Black, whose views on symmetry, line and composition greatly influenced the young artist.

Smart began exhibiting in group shows in the early 1940s and had his first solo exhibition in Melbourne in 1944. Inspired by the poetry of TS Eliot, his early landscape The Wasteland II 1945 was painted during his formative years in South Australia where he began to establish his remote vision of the urban landscape.

Smart travelled to Europe in 1948 and studied under Fernand Léger at the Académie Montmartre in Paris. He also visited Italy and England, seeking out the work of post-impressionist French painter Paul Cézanne, 15th-century Italian painter of perspective Piero della Francesca and northern Renaissance artist Rogier van der Weyden for their treatment of perspective, space and composition.

Returning to Australia in 1951, Smart won the Commonwealth Jubilee Open Art Competition and settled in Sydney, where he lived for the next 12 years, working among artists who included Russell Drysdale, Justin O’Brien and Jean Bellette. He was an art critic for the Daily Telegraph for a short time and a host on the popular children’s radio program The Argonauts Club. He also taught at East Sydney Technical College (now the National Art School).

In 1963 Smart left Australia permanently for Rome. It was during this decade he gained major recognition for his meticulously crafted paintings. Later he moved to Arezzo in Tuscany where he remained for the rest of his career; he died there in 2013.

Smart dedicated himself to the representation of the modern city. He executed each painting with classical precision and included repetitious architectural motifs which reference Renaissance perspective. He saw beauty in everyday scenes, choosing to paint highways, factories, trucks and vacant city lots – as seen in a number of works in the Art Gallery of NSW collection such as Truck and trailer approaching a city 1973.

Portrait of Clive James 1991-2 is significant because it belongs to a trilogy of rare portraits painted by the artist in the 1980s and early 90s (along with Portrait of Germaine Greer 1984 and Portrait of David Malouf 1980). Smart has depicted the author standing on an overpass, small and isolated within the iron and cement structures of the city. The fence is based on a motif the artist saw in Japan:

I happened to be in Tokyo, on a train, and I spotted this lovely yellow corrugated iron fence – and I thought, that’s the ideal place for Clive. It’s really a portrait of a yellow fence, and Clive is the figure in the composition.

Matisse at Ashford 2004, arguably one of Smart’s finest paintings from his later years, was acquired by the Gallery in 2007. The repeated motif of an exhibition poster advertising Matisse cut-outs at the Royal Academy, London appears on each platform of Ashford Station, emphasising Smart’s interest in repetition and visual irony. Smart has said of his work: 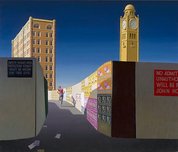 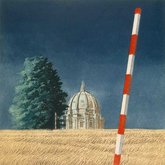 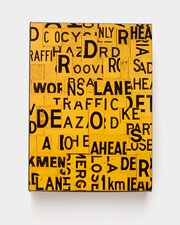 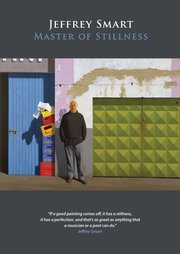 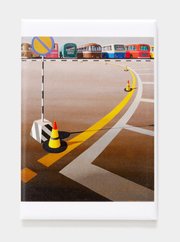