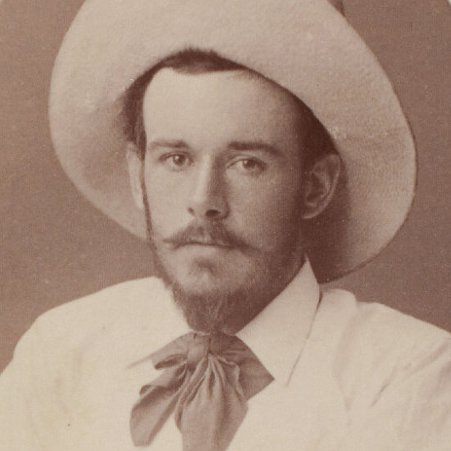 Working in fin-de-siècle Europe, John Russell was the only Australian painter to have been closely associated with some of the most original and influential artists of late 19th-century France, including Auguste Rodin, Claude Monet, Vincent van Gogh and Henri Matisse. Although he shared the European artists’ desire to develop a fresh approach to painting, Russell nevertheless retained strong Australian affiliations and an artistic temperament defined by a vigorous, colourful and optimistic approach.

The son of a wealthy engineer, Russell was born in Darlinghurst, Sydney in 1858. The death of his father in 1879 gave him the financial independence to pursue a career in art, and he travelled to London to study at the Slade School of Art from 1881 to 1883 under Alphonse Legros. As well as brief return visits to Australia, Russell travelled to Spain in 1883 with Tom Roberts and Will Maloney, and visited plein air painting colonies in Cornwall in 1885. Moving to Paris, he trained at the Atelier Cormon from 1885 to 1887, where he formed a friendship with Vincent van Gogh, whose portrait, now in the Van Gogh Museum, Amsterdam, he painted in 1886. A sheet of drawings by Russell in the collection of the Art Gallery of New South Wales, Five studies of Vincent van Gogh c1886-8, depicts van Gogh with a shaved head, or very closely cropped hair, as he painted himself in 1888.

In Paris, Russell became interested in the work of the impressionists, applying their approaches to colour and subject to his own work. He engaged with a circle of progressive young French artists including Henri de Toulouse-Lautrec, Louis Anquetin, Emile Bernard and Armand Guillaumin. In 1886 he visited the French island Belle-Île-en-Mer off the coast of Brittany where he met Claude Monet, who was to become a strong influence. The following year Russell visited Moret, a small village south of Paris by the Loing River, where he stayed in a villa next door to the painter Alfred Sisley. There he made a number of paintings including Madame Sisley on the banks of the Loing at Moret 1887, which shows Sisley’s wife Marie, painted with the broken brushstrokes and high-key palette of the impressionists.

In 1888 Russell married Marianna Antionetta Mattiocco and, attracted by the wild, rocky landscape and unpredictable waters of the Atlantic Ocean, returned to Belle-Île-en-Mer, settling into a newly-built house of his own design. At Belle-Île he painted a number of key subjects on the island, including the sea, cliffs, rocks and portraits of his family and the local fisherman, Père Polyte, immortalised in Mon ami 'Polite 1900. Other works from this period include the watercolour Les aiguilles de Coton, Belle-Île 1897, which depicts the Port-Coton needles, a distinctive rocky outcrop near Russell’s house, and Rough sea, Morestil c1900, in which foaming waves animated through vigorous gestural brushstrokes sweep across the canvas, breaking onto a jagged coastline rendered in deep shades of blue that frames the left side of the composition.

Russell left Belle-Île in the autumn of 1890 to see the Midi and Riviera, where van Gogh and Monet had worked. He crossed France in a horse-drawn cart and took a house for the winter in the ancient seaport of Antibes, producing some of the most dazzling canvases of his career. Antibes c1890-2, produced from working outdoors in the southern light, demonstrates Russell’s pursuit of pure colour and his move away from the restraints of naturalistic form, a shift that he outlined in an 1890 letter to Roberts: “[I] have been chasing after broken colour… you see I now put the colours on as pure as I can without stirring them up on the palette, so that they are without the protective influence of the body white…’

In the summers of 1896 and 1897 Russell painted with Matisse in Belle-Île, encouraging him to paint with a purer palette. He exhibited with the Salon d’Automne in 1905. Following the death of his wife in 1908 he left France. In 1912 he married the American singer Caroline de Witt Merrill, and after periods in Italy, London and New Zealand, returned to Australia, settling in Watson’s Bay, Sydney in 1923.

In 1978 scholar Ann Galbally curated a retrospective exhibition of Russell’s work which opened at the Van Gogh Museum in Amsterdam before touring Australia, enhancing the appreciation of the artist, while two exhibitions at the Musée des Jacobins at Morlaix in 1994 and 1997 responded to a growing French interest in his oeuvre. The exhibition Belle-Île: Monet, Russell & Matisse in Brittany, was held at the Art Gallery of New South Wales in 2001.

Other works by John Russell