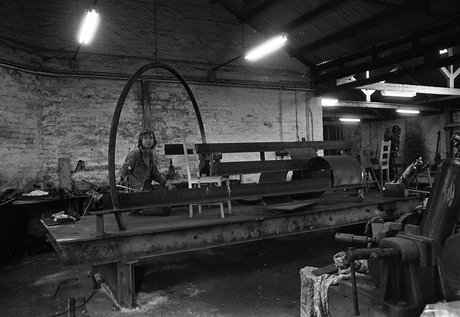 Artist and educator Ron Robertson-Swann is best known for his abstract metal sculptures, often painted in bright colours, including Vault, one of the most talked-about artworks in Australian history.

Born in Sydney in 1941, he studied sculpture at the East Sydney Technical College (now the National Art School) from 1957 to 1959. The following year he left for Europe and in 1962 began a post-graduate course in sculpture at St Martins School of Art in London, where he was taught by the renowned sculptors Anthony Caro and Phillip King, who were leading a move towards abstraction and experimenting with colour as well as new methods and materials, particularly steel. He also worked, like Caro and King before him, as an assistant to Henry Moore, perhaps the pre-eminent British sculptor of the 20th century.

Robertson-Swann taught at St Martins from 1963 then at East Ham Technical College from 1965 to 1966 and at Goldsmith’s College at the University of London in 1967. With limited resources to create his own steel sculptures, Robertson-Swann focused much of his production during this period on painting, after encountering the work of Morris Louis; painting would remain a significant part of his practice. In 1965, aged 24, he won an award in the John Moores Painting Prize in Liverpool, which was judged by Clement Greenberg, one of the world’s most influential art critics.

In 1968, Robertson-Swann returned to Sydney and staged his first solo exhibition of paintings and sculpture at the Rudy Komon Gallery. He was also among the mainly young artists included in the landmark group exhibition The field at the National Gallery of Victoria and the Art Gallery of NSW, the first comprehensive display of colour-field painting and abstract sculpture in Australia. For logistical reasons, he was represented by three hard-edge paintings, rather than sculpture, including Golden breach, now in the Art Gallery of NSW collection. In 1969, he won the Transfield Art Prize for another of his large abstract paintings and the Comalco Invitation Award for Sculpture in Aluminium. He also began lecturing in architecture at the University of New South Wales and at the National Art School, Sydney. Robertson-Swann’s steel sculptures Pompeii and Husk both entered the Gallery collection in 1974.

Robertson-Swann returned to the National Art School in the 1990s after more than a decade at Canberra School of Art as head of the sculpture department (from 1978 to 1989), eventually filling the role of head of sculpture at the NAS from 2009 until his retirement in 2018.

Throughout his career, Robertson-Swann has continued to exhibit regularly and win prizes, including the Mildura Purchase Prize in 1970. He has produced several public commissions, including the work for which he is best known, Vault. This site-specific sculpture was installed in Melbourne’s City Square in 1980. Large, angular and bright yellow, it was dubbed ‘The yellow peril’ and generated heated public debate. In 1981, it was relocated without his consent to the obscurity of Batman Park until it was transferred again in 2002 to its current location outside the Australian Centre for Contemporary Art.

Robertson-Swann was a founding member of the Visual Arts Board of the Australian Council and an advisor to Sculpture by the Sea, a popular annual outdoor art exhibition that started in Bondi in 1997. In 2002, he was awarded an Order of Australia Medal for services to sculpture and education.

Ron Robertson-Swann’s archive is held in the Art Gallery of NSW’s National Art Archive, along with an interview with the artist.

Other works by Ron Robertson-Swann