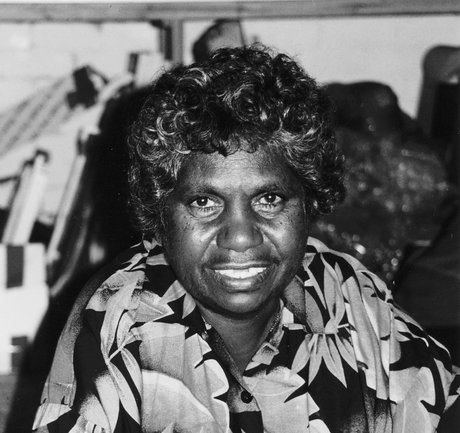 Since her first solo exhibition in 1991, Gloria Tamerre Petyarre has been regarded as a leading artist in the Utopia community, and has exhibited widely in Australia, Europe, North America and Asia. Like Emily Kam Ngwarray, Petyarre first came to prominence as a batik painter in the late 1970s, before taking up painting on canvas in the late 1980s. As various commentators have noted, this use of sophisticated batik-making techniques, combined with the early referencing of body marking associated with women’s ceremonies, shaped the unique forms of Utopia painting in the 1980s. Petyarre, one of four renowned painter sisters, is considered to have taken various forms based on ceremonial markings and her Altyerr or Aknganenty stories to abstraction more consistently than many of her contemporaries.

Petyarre is an experimental artist renowned for her diversity and mastery as a colourist. Her work is anchored in ‘awely’ – a term that not only describes women’s ceremonial body painting but also the wider concept of ‘women’s business’. For example, Petyarre’s major, 21-panel work, Awely for the mountain devil lizard (Twenty-one women), 1996, refers simultaneously to ceremonial body painting as sourced in stories relating to Arnkerrth, the mountain devil lizard, and to a larger cosmology that is foundational in Petyarre’s painting. Arnkerrth is a major subject, of particular importance to Petyarre, and her ability to constantly re-invent its visual representations has been widely recognised.

These panels, which could form an installation, reveal a great deal about the positioning of Petyarre’s work both within traditional Aboriginal culture, and in dialogue with contemporary art practices. Her painterly abstractions of 21 women seem to make tangible the movement, energy and rhythms of ceremonies in which women themselves embody the creative act. They can also be viewed as forming an abstract series that conforms to the classic canons of Western modernism, with the use of serial units, repetition, a lack of focal point, an underlying grid structure and close-toned optical effects.

In her paintings throughout the 1990s, which progressively increased in size and painterly precision, Petyarre created some of the most significant recent Aboriginal artworks. They are spectacular paintings, in which she has lately been supplanting her dots and lines with elongated drop-forms in feathery layers that move over the surfaces of her work with the velocity of wind in foliage or the fluidity of water currents.

Other works by Gloria Tamerre Petyarre