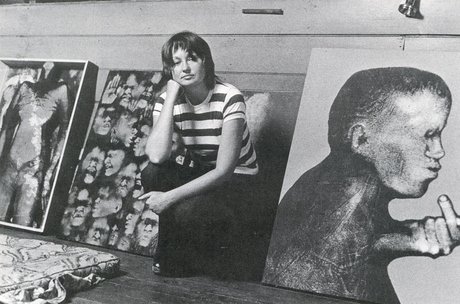 Landscape, and the way people interact with their environment, runs through the work of Polish-born artist Ewa Pachucka, who lived in Australia from 1971 until 2000.

Born in 1936, Pachucka first studied art in her hometown of Lublin and then Łódź, the historic site of Poland’s textile industry. As a student she was drawn to abstraction, rebelling against the socrealizm (socialist realism) doctrine enforced by the pro-Soviet communist government that pervaded Polish art after World War II.

Inspired by the renowned Polish weaver Jolanta Owidzka, whose experimental approach incorporated material such as hand-spun wool, leather and metallic fibres, Pachucka put aside her brushes and printmaking tools. Instead, she began to create three-dimensional forms, working quickly and spontaneously with string made from hemp and jute rope, found at a fishermen’s shop and using an implement more commonly found in the domestic sphere. The process she employed was crochet.

Pachucka’s early crocheted work, produced during the 1960s, resembled organic forms found in the natural world. Long cylindrical shapes were created from chains of interlocking loops of sisal and hemp circling round and round. Human forms began to appear, bodies in ‘suspended animation’, their movements captured like the preserved figures of Pompeii or the mummified corpse of Tollund Man found buried in a Danish peat bog in 1950.

After a brief period in Denmark, Pachucka and her husband Romek Pachucki arrived in Australia in 1971 and, with the help of sculptor Marea Gazzard, settled in a cottage in the Sydney suburb of McMahons Point.

Over the following six years, Pachucka’s crocheted figures became more complex, achieving what the artist described as ‘an illusion of reality’. She began to create environments, settings in which life-size figures were arranged in groups, then dramatically lit, emphasising the heavily-textured surfaces.

Pachucka’s responsiveness to what she called ‘the strata of art’, acknowledging the long history of Western art from the antique through to the sculptural work of American pop artist George Segal, informed these installations. She told April Hershey in 1977 in Craft Australia:

I am really trying to… continue that theatrical art of the 17th century… I want to be part of that early fluency – the river of art.

Arcadia: landscape and bodies, in the Art Gallery of NSW collection, was created over a five-year period between 1972 and 1977.

In 1975, the artist settled in Hobart, where she continued to evolve these remarkable tableaux vivant. Her vision was to establish a co-operative of cottage industries, utilising the natural resources abundant in Australia: ‘I would love to see this country made self-sufficient,’ she once said. ‘Something completely different and simple’ – a dream that ultimately was unfulfilled.

Over the following 25 years, however, Pachucka completed several public art commissions, including the sandstone sculpture Fossilized architectural landscape for the Outdoor Sculpture Garden at the new Parliament House in Canberra.

Pachucka returned with her husband to Europe in 2000 and lived in France, in the rural Midi-Pyrénées region near Toulouse, where she continued to create art and renovate her home up until her death in 2020, still holding fond memories of the peace and beauty of Australian nature. She said:

Environment and nature are my life passion. In Australia I found a paradise, but also I felt more that I am European, which reflects in most of the work I made there.

Other works by Ewa Pachucka