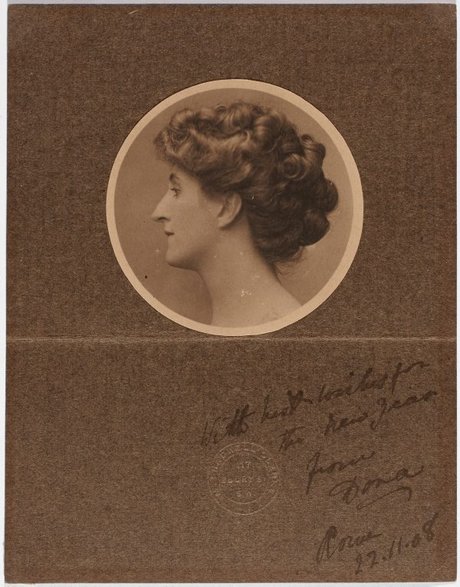 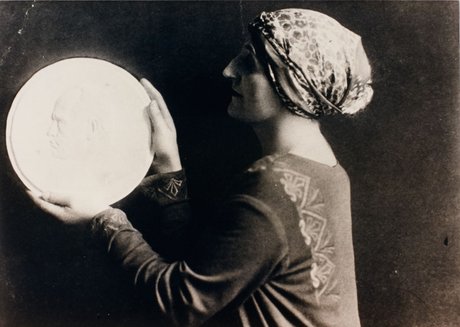 Dora Ohlfsen with the plaster cast of her 1922 medallion of Mussolini, 1922, by unknown photographer. Source: Art Gallery of New South Wales archive

In the early 20th century, Australian-born, Italian-based artist Dora Ohlfsen was one of the world’s most highly regarded sculptors and designers of medals and medallions. In Australia, she is best known for her ANZAC commemorative medal.

She was born Adela Dora Ohlfsen-Bagge on 28 August 1869, in Ballarat, Victoria, a city for which she retained a continuing affection, later completing a series of sculptures and gifting a number of her works to its regional gallery.

Ohlfsen moved to Sydney with her family at age 15 and attended Sydney Girls High School, where she showed a talent for music and languages. In 1886, she travelled to Europe to continue her piano studies in Berlin but had to abandon her promising musical career after developing neuritis in her arm. She moved to St Petersburg – home of the woman who would be her lifelong partner, the wealthy and well-connected Elena von Kugelken – where she worked for the US Consul-General (some say as a spy), taught music, wrote articles and took up painting.

In 1902 Ohflsen moved again to Rome. Initially, her plan was to study painting but she soon realised that ‘sculpture attracted me most, and I worked at that’. A particular influence was the engraver Pierre Dautel. Like him, Ohflsen began to specialise in medal art and quickly achieved success, exhibiting regularly and receiving many portrait commissions over the years. But it was her medal The awakening of Australia art 1907 that garnered her international recognition. Exhibited in Paris, it was acquired by the French Government – her first work to enter a public collection. In 1908 it received an award at the Franco-British exhibition in London, where it was included in a presentation of Australian women’s art. Initially rejected by the trustees of the Art Gallery of New South Wales, it was eventually purchased for the collection in 1909.

Ohlfsen returned to Australia in 1912 after a 20-year absence. While her trip home was for family reasons, she encountered such interest in her work that she set up a studio-salon in Bathurst Street, Sydney, and exhibited with the Royal Art Society of New South Wales. An exhibition of her medallions was held in Melbourne in 1913.

In August that year the trustees of the Art Gallery of New South Wales commissioned Ohlfsen to complete a bas-relief bronze panel to be placed above the Gallery’s entrance door. She worked on it from her studio in Rome over the next several years. However, the trustees suddenly cancelled the commission in 1919 and the work was never installed. This remained the greatest disappointment of her artistic career.

Having returned to Italy, Ohlfsen became a nurse with the Red Cross during the First World War. She also began work, at her own expense, on a series of commemorative medals honouring Australian soldiers, including Anzac in eternal remembrance. Regarded among her finest works, it is one of the first pieces of commemorative sculptural art dedicated to the ANZACs. It was also one of the first works not to glorify war but to honour those forgotten victims: grieving women. Ohlfsen arranged to sell the medal in London under the British War Charities Act in aid of permanently disabled Australian and New Zealand veterans.

After the war, in 1922, Benito Mussolini, the leader of the Fascist Party, became prime minister of Italy. Ohlfsen received commissions from, and in support of, the regime. In 1926 the owners of a bauxite commissioned her to make a portrait medallion of Mussolini. She visited ‘Il Duce’ five times and made detailed studies of him as he worked in his apartment at the Palazzo Chigi.

Ohlfsen was also entrusted with the design for a war memorial at the naval base of Formia. She began the work, for which she received no payment, in 1923, and it was dedicated on 18 July 1926. The memorial was Ohlfsen’s most important commission, and its central figure representing beauty, youth, strength and sacrifice, anticipates much of the monumental fascist sculpture of the late 1920s and 1930s.

As the 1920s progressed and fascism tightened its grip on Italy, Ohlfsen sought new sources of institutional patronage away from the state and began making work for the church. She took up fresco painting and made modern encaustic icons and sculptures.

On 7 February 1948, Ohlfsen and Von Kugelgen were found dead in their Rome apartment. The coroner’s report found their deaths to be accidental through gas poisoning. The epitaph on Ohlfsen’s tombstone reads: ‘Dora Ohlfsen Bagge. Australian by birth, Italian at heart’.

Other works by Dora Ohlfsen