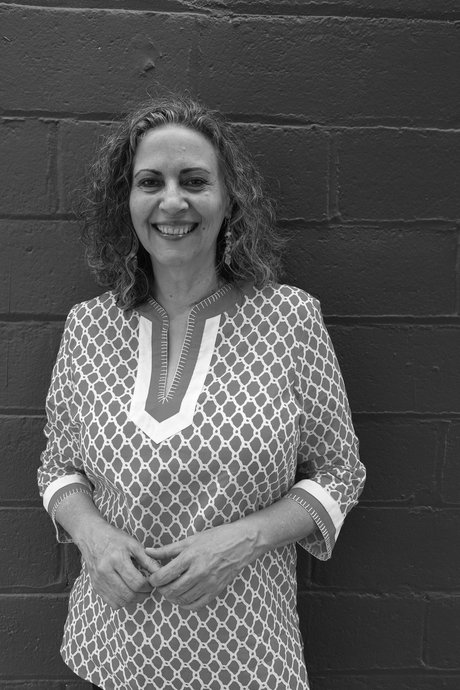 Sally Morgan belongs to the Palku and Nyamal peoples of the Pilbara. Her family was part of the Stolen Generation and she grew up in Perth, unaware of her Aboriginal heritage. Until the age of 15 she was led to believe that she was of Indian descent. This experience of hidden origins and her subsequent quest for identity were the inspiration for her 1987 autobiography, My Place. While researching her family history for this book, Morgan’s childhood interest in art was rekindled. In 1986, Sally Morgan held her first exhibition at the Birukmarri Gallery in Fremantle. She is currently Director of the Centre for Indigenous History and Arts at the University of Western Australia, Perth. She has continued to write, publishing children’s stories, another book and a play.

Citizenship, 1987, is Morgan’s most widely known print. It was made for the Right Here, Right Now Australia 1988 exhibition held at Adelaide’s Experimental Art Foundation, which presented an alternative perspective on Australia’s 1988 Bicentennial celebrations. The text at the bottom of the print refers to the Natives (Citizenship Rights) Act of 1944 (Western Australia), which required Aboriginal people to apply to become ‘citizens’ of their own land. This Act allowed for magistrates to provide certificates of citizenship to Aboriginal people ‘ … deemed to be no longer a native or Aborigine’. Strict conditions applied: Aboriginal people had to adopt the manner and habits of ‘civilised whites’, they were not allowed to freely associate with other Aboriginal people and their citizenship papers could be summarily revoked for infringements of these conditions. Jack McPhee, Morgan’s grand-father, recalled, ‘ … We used to joke about the whole thing among ourselves … We all called our papers a Dog Licence: we thought that was a better name for it than Citizenship.’

Printmaking has a long history as a medium for social criticism and commentary. Morgan’s cartoon-like work has a graphic quality that belies its serious intent. Citizenship is an unusual symbolic image for the abuse of Aboriginal people, and all the more memorable because of this. The dog Morgan depicts, which has been compared with Anubis, the jackal-headed Egyptian god of death, evokes ideas of servility and suggests that even this animal is better treated than Aboriginal people in their own land.

Other works by Sally Morgan