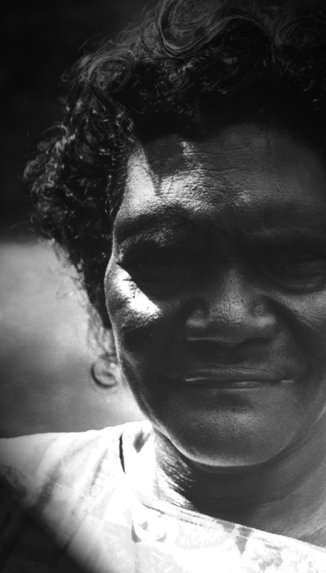 Galuma Maymuru is the daughter of Narritjin Maymuru. She grew up at Yirrkala Mission in north-east Arnhem Land. Since 1974 Galuma has lived either at the homeland centre of Yilpara or at Dhuruputjpi in her husband Dhukal Wirrpanda’s Dhudi Djapu clan country, close to her own Manggalili clan lands. For ten years she was the community’s schoolteacher, before becoming a full-time artist.

Her first solo exhibition in 1999 at the William Mora Galleries, Melbourne, was subtitled ‘In memory of Narritjin’, acknowledging the debt she owed to her father, who taught her to paint and carve. With her father’s encouragement, she was one of the first generation of Yolngu women to become major artists. ‘He’d say “this is our painting and I’m telling you about the paintings for in the future when I am passed away you can use them”.’ She learned by watching Narritjin paint and then worked on small bark paintings herself, practising the techniques ‘ … until my hand got better, putting it into my mind’.

Galuma stresses the intellectual energy she invests in her art, from her engage-ment with the landscape through the ancestral designs, and then creating the final image on the bark or as a carving. Her work is multi-layered, recreating the lives of the ancestral beings in the landscape at Djarrakpi, among them the ancestral woman Nyapililngu as she wanders in the sand dunes at Djarrakpi, and the hunter Muwandi poised on a rock spearing yambirrku (parrot fish). Many of Galuma’s finest paintings and carvings – such as Nyapilingu ga Guwak, 1999, and the Sacred digging stick, 1999 – emphasise the transformational nature of the spiritual world, with figures appearing from and disappearing into a background pattern of Manggalili clan designs that represent the moving surface of the rivers, sand and sea.

To Galuma, art is an act of memory and a process of transmission, in which she passes Manggalili law on to new generations of her clan. Equally, it is a spiritual and aesthetic exploration of her homeland.