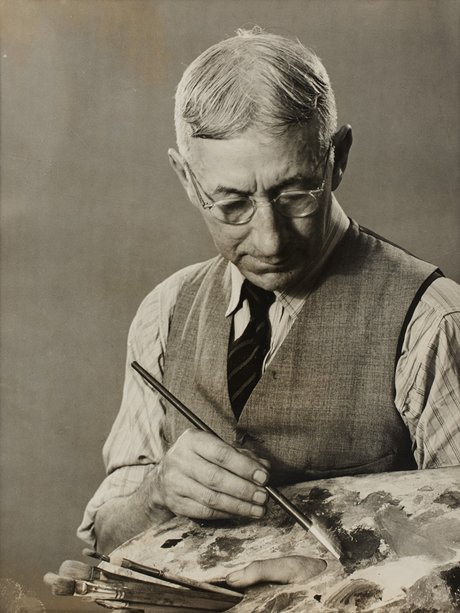 Sydney Long is best known for his art nouveau inspired depictions of the Australian landscape. Fusing elements of this decorative style with mythological subject matter, Long produced a series of seminal paintings during the 1890s that presented an alternative vision of the Australian landscape, painting it not in terms of its representational qualities, but transforming it into an arena of sensation and emotion.

Born in Goulburn, New South Wales, in 1871, Long trained in decorative design before moving to Sydney in the early 1890s. He absorbed the lessons of naturalism and plein-air painting at the Art Society of New South Wales School, studying under AJ Daplyn and Julian Ashton, and began exhibiting works in 1894. His artistic debut, the critically acclaimed By tranquil waters, was purchased by the Art Gallery of New South Wales. Here, Long merged the principles of his Ashton School-training with his own mood-driven expression of place, initiating a series of bush idylls in which he increasingly abstracted natural forms.

In Spirit of the plains ,1897 Queensland Art Gallery, Long shifted to an overtly mythological subject matter, depicting a female nymph piping a chorus of dancing brolgas through the landscape. Synthesising shimmering visual form, mythological subject and musical allusion Long established his vision of landscape as a dream-like, poetic formulation.

In Pan, 1898, Long painted a gum-treed Arcadia, where the pagan god of nature plays his pipes to a gathering of nymphs and satyrs. Allusions to Pan’s music are used to visually transpose the enchanted twilight scene into a series of rhythmic art-nouveau arabesques echoed in the crooks and curves of the dancing bodies. Long images the landscape as an arena of sensation and emotion, referencing the natural abundance and liberating abandon of classical Arcadia with the Australian landscape.

The English journal The Studio, reviewing the 1898 exhibition of Australian art at the Grafton Gallery in London that included Pan and Spirit of the plains, saw Long’s work of ‘imaginative design’ against the otherwise ‘straightforward realism’ seen as the overall dominant aesthetic of the exhibition. In Australia too Long was praised for bringing ‘a relief to the realism which …has almost wholly characterized Australian art’. Pan registered a clear stylistic shift in Australian painting and was instrumental in sealing Long’s artistic reputation as ‘contemplative, philosophical and a trifle metaphysical [dealing] with the abstract more than the concrete side of things’.

Long became a member and later President of the Society of Artists and taught at Ashton’s Art School, becoming second in charge by 1907. By this time, his attention to experimental art forms diminished, but the subjects of his late-century successes remained entrenched in his imagination. Long returned to the theme of Pan in Fantasy ,c1916-17 that reworked from his earlier, now lost Pastorale, 1909, a non-nationally specific landscape with flattened form and colour, marking the extreme of his ventures into abstraction. Demonstrating the Arts and Crafts ideal of the exchange between painting and the decorative arts, Mildred Lovett developed Long’s original composition in a 1909 vase design, where the painting’s flattened art-nouveau pattern is transposed by the rhythmic rise of the object’s form.

Travelling to London in 1910, Long studied printmaking at the Central School of Arts and Crafts and was taught etching by Frank Emanuel and Malcolm Osborne. Serving to publicise his work in Australia and England and also provide an additional source of income, many of Long’s etchings were based on earlier paintings including Pan, 1919. The print demonstrates Long’s skill at using aquatint to achieve a great atmospheric tonal range that imbues the landscape with a dreamy, romantic ambience.

In London, Long exhibited intermittently at the Royal Academy and was elected an associate of the Royal Society of Painter-Etchers and Engravers in 1920. The following year he visited Australia and joined the Australian Painter-Etchers’ Society, becoming president in 1925 when he returned to Sydney. Long continued to paint landscapes of the countryside around Sydney, including The morning moon, 1937, a finalist in the 1937 Wynne Prize, and went on to win the Wynne Prize in 1938 and 1940. He was a trustee of the Art Gallery of New South Wales from 1933 to 1949, but returned to London in 1952 when his health failed.

Other works by Sydney Long