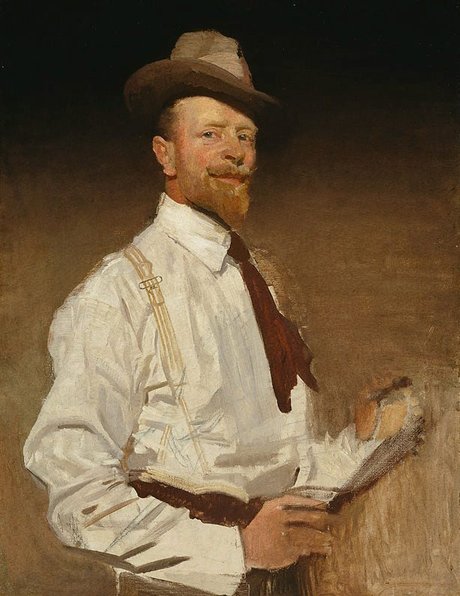 Within the predominantly landscape-based Australian painting tradition, George W Lambert was one of the few artists to describe the essence of place in terms of people and society. Although his early work, produced during the nationalistic period of the 1890s, celebrates rural themes, Lambert is best known as a society and portrait painter. He was awarded the Archibald Prize in 1927. In addition to his versatile approach to portraiture, landscapes and still life, he was a skilful draughtsman and, in later years, a sculptor.

As a child, Lambert had a cosmopolitan upbringing in Russia and Europe, with his adolescence spent on an Australian property. Travelling from Australia to Europe in 1901, he was greatly impressed by the Spanish artistic tradition and most particularly the work of Diego Velázquez. Initially based in Paris, he moved to London in 1902, establishing a significant reputation as an academic realist and exhibiting regularly with the Royal Academy. He also served as an official Australian war artist during the First World War. Following his return to Australia in 1921, Lambert enjoyed an undisputed dominance in the Sydney art scene. Although not a modernist himself, he was an enthusiastic supporter of artistic innovation within a formalist, design-based aesthetic.

One of the most well-represented artists in the collection, Lambert’s first major work, A bush idyll, was acquired by the Art Gallery of New South Wales in 1896 and three years later he was awarded the Wynne Prize for landscape painting for Across the black soil plains. The success of his first two paintings of bush life encouraged Lambert to enter the first New South Wales Society of Artists Travelling Art Scholarship, which funded his move to Europe. Upon his return to Australia the Gallery acquired portraits and figure compositions. The Lambert Memorial Fund, organised by the Society of Artists, resulted in a large number of his works entering the collection following his death.

Other works by George Lambert