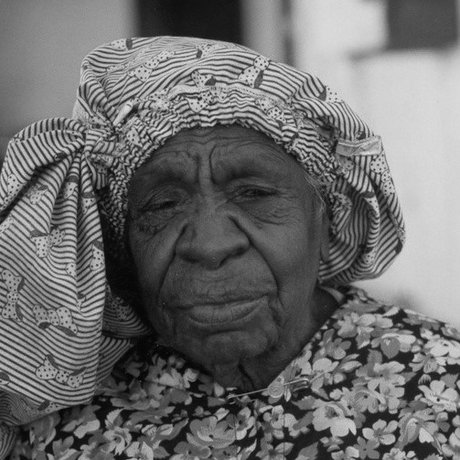 Ngwarray’s Untitled (Alhalker), 1992, has been perceived as a lyrical mapping of country, a poeticising of the desert in bloom, or simply as a spectacular abstract painting. Alhalker, the desert country of Ngwarray’s birth, is anchored by a sacred rock in the form of a spectacular arched monolith, and shaped by the vagaries of the harsh desert environment. From the beginning, Alhalker remained the means and end of Ngwarray’s art.

Ngwarray attained artistic maturity as a woman in her seventies, not long converted to the techniques of painting on canvas, but with decades of painting in a ceremonial context and activity with the Utopia Women’s Batik Group behind her – as well as life as a camel handler and stockhand. In an extraordinarily prolific eight years of professional painting, she produced magnificent canvases in which she appears to have aimed for essentialist visions of the multiplicities and connectedness of her country, as imaged in terms of its organic energies. Ngwarray’s vital traceries both conform to, and seem to expand beyond, her clan codes, in abstractions of ceremonial markings and imagery of her country’s flora and fauna.

During the early 1990s, Ngwarray developed a painting technique that literally embodied her sense of the explosive, yet ordered, rhythms of the natural world: she energetically worked her canvas with fluid dots or blobs of colour that formed a pulsing layer over the ‘mapped-out’ underpinnings of her paintings. Later, she embraced the austerities of stripe compositions in works such as Untitled (Awely), 1994, and in seething, linear ‘yam Dreaming’ paintings, before she created the remarkable blocky gestural abstractions of 1996, the final year of her life.

Other works by Emily Kame Kngwarreye