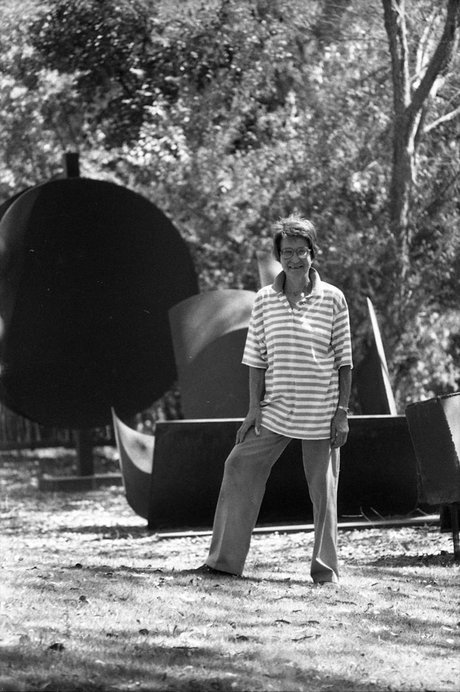 One of Australia’s most prominent sculptors, Inge King was at the forefront of the development of non-figurative sculpture in this country. Influences visible in her work are varied: they include animal and plant forms and the rings and swirls of the solar system, and often contain abstracted figurative components.

Born Ingeborg Neufeld in Germany in 1915, King studied at the Berlin Academy from 1937 to 1938, at the Royal Academy School in London in 1940, and at the Glasgow School of Art from 1941 to 1943. She relocated to Australia in 1951 with her new husband, Australian artist Grahame King, and they lived at Warrandyte in outer Melbourne.

King initially earned a living designing jewellery and later made occasional forays into collage and printmaking. She was originally a carver and much of her early work was made from wood, sandstone, marble and alabaster. In 1959 she acquired an arc welder and began making welded steel sculptures and assemblages, often with heavily textured surfaces, including Castle 1961 and Captive 1965 – both now in the Art Gallery of New South Wales collection. Later works, such as Planet 1976-77 and Bavardage II 1994, incorporated a more polished surface texture though she remained devoted to the use of steel.

In 1961, King founded the Centre Five group of sculptors, along with Vincas Jomantas, Julius Kane, Clifford Last, Norma Redpath and Teisutis Zikaras, with Lenton Parr joining soon after. The group aimed to bring contemporary sculpture to a wider audience, and were at the forefront of a change in taste among audiences and gallerists towards contemporary sculpture, particularly abstract sculpture, which was not widely accepted in Australia at that time.

King is perhaps best known for her large-scale public sculptures, such as the vast Forward surge 1974-81, located outside the Arts Centre in Melbourne. She was awarded an Order of Australia in 1984 and in 2008 received the Visual Arts Emeritus Award from the Australian Arts Council, in recognition of her role in raising the profile of modern sculpture in Australia.

Other works by Inge King