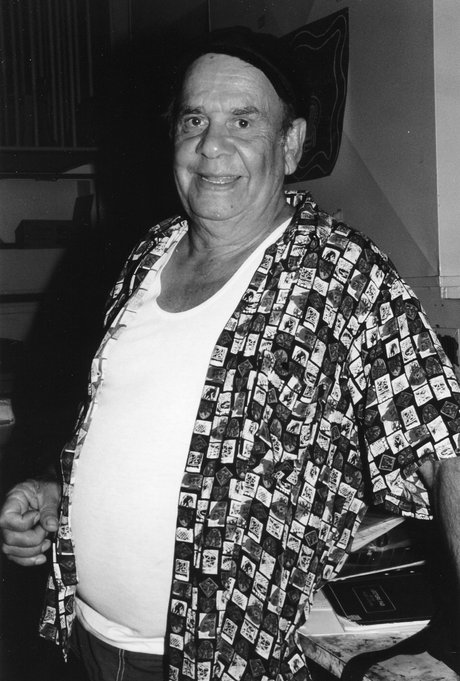 Roy Kennedy, like many contemporary Aboriginal artists, came to art late in life. As he says, ‘ … I’m living proof that you’re never too old to learn’. Kennedy began studying painting and etching at the Eora Centre TAFE (Technical and Further Education) in Redfern, Sydney in 1995. Adult education centres such as Eora offer Aboriginal students the chance to catch up on the education denied them as children, and also to train in art making techniques. Many artists living and working in the city today, including Kennedy and fellow Eora Centre graduates H. J. Wedge and Elaine Russell, are using their newly acquired skills to reflect on their young lives on Aboriginal missions in rural Australia.

Kennedy was born on the Police Paddock Mission at Darlington Point, near Griffith in New South Wales. In his intimately detailed views of the people and places of his childhood, Kennedy’s strength of vision as an artist is revealed. Pepper Tree Avenue was the arterial road leading to the mission from the highway. In Pepper Tree Avenue, 2001, Kennedy depicts the familiar landmarks of his childhood: the mulberry trees, the mission church – home of ‘the brainwashers’ – and the Murrumbidgee River. Kennedy has said, ‘ … Pepper Tree Avenue was on Warangesda Mission where my mother was born in 1910. This mission was closed down in 1925, so all my people were scattered everywhere. Eventually they were moved to the mission on the police paddock, [and] from there on all the old people were classed as fringe dwellers.’

Drawing on his mother’s stories and his own experience, Kennedy’s work documents a life of dislocation and deprivation, from the Depression years up until the abolition, in 1940, of the notorious Aborigines Protection Board that managed the missions in New South Wales. With the greater freedom that ensued, families often dispersed from the missions to find work in the surrounding agricultural communities. Kennedy recalls, ‘ … wandering around doing seasonal work wherever and not finding any satisfaction with the rough life, not caring much about tomorrow’. He worked as a ganger on the national railway and, like many young men, drifted towards the big city, seeking refuge in the growing metropolitan Aboriginal communities.

Kennedy’s memories of mission life are bittersweet, underscored by the sense of community that saw his family through hard times. His ‘Mission Series’ prints chronicle his first-hand observations of a chapter of Australia’s history that is finding increasing expression in the work of Indigenous artists.

Other works by Roy Kennedy