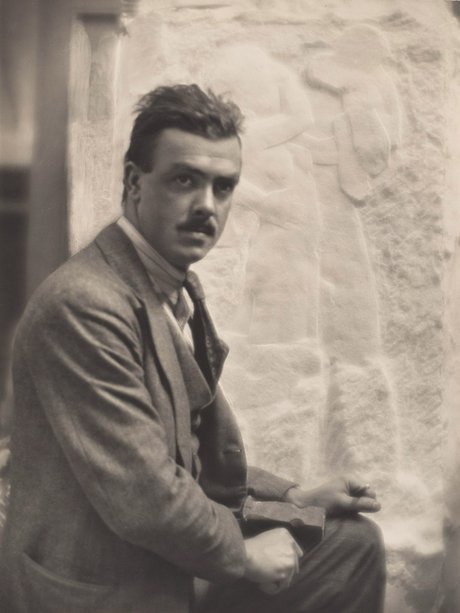 Working between the First and Second World Wars, Rayner Hoff transformed Australian sculpture. He was both part of, and a challenge to, the Australian art establishment as a leading figure in art education and our foremost art deco sculptor, who produced major high-profile commissions and works of explicit sensuality and, at times, radical sexuality.

George Rayner Hoff was born on 27 November 1894 on the Isle of Man (one of the British Isles). His father was a stonemason and woodcarver, who he would later assist on architectural modelling jobs. From 1910, Hoff studied drawing and design at Nottingham Art School, winning numerous prizes. After enlisting in the army in 1915, he fought in the trenches in France then, after his drawing skills were noted, spent the rest of World War I producing battlefield maps from aerial photographs.

After the war, Hoff started at the Royal Academy of Art in London, studying sculpture under Derwent Wood and winning the prestigious Prix de Rome, which enabled him to travel to the Italian capital where he further immersed himself in classical and Renaissance art. One of his entries for the prize was Hercules, Achelous, Deianeira 1920, now in the Art Gallery of NSW collection.

In 1923 Hoff migrated to Australia to take up a teaching position at the East Sydney Technical College, where he would be hugely influential, eventually becoming head of the art department and then principal. His students included Arthur Murch and Lyndon Dadswell as well as an outstanding group of women artists including Eileen McGrath, Barbara Tribe, Marjorie Fletcher and Jean Broome-Norton, who he enlisted in his sculpture ‘Academy’ and who are now considered some of the period’s most significant sculptors.

While it was not unusual for art schools to be made up primarily of female students, sculpture departments had still been seen as the domain of men; Hoff’s school was therefore significant in opening up the possibilities of training to women. Many of Hoff’s female students also assisted him in the private studio he established at the college.

Not long after Hoff’s arrival, a critic in the Bulletin wrote: ‘with the exception of a well bred polo pony by [George] Lambert, Hoff has the mausoleum to himself’, summing up the situation for sculpture in the country. Yet by the early 1930s Hoff was described as one of the most conspicuous figures of the Australian art world.

Hoff and his students produced a remarkable body of work in the years between World War I and II – much of it linked to post-war reconstruction ideals – which used art-deco stylistics to ‘modernise’ classical traditions.

From his arrival, Hoff was involved with a group of writers, musicians and artists, including Norman Lindsay, who viewed classical culture as an ideal state and Australia as an Antipodean Arcady. He was also committed to vitalism, a doctrine that proposes that living things are animated by more than physical or chemical forces but also by a 'life-energy’. These were among a number of ideas – including nationalism, eugenics and the body culture movement – that were prevalent in the period.

‘I doubt if ever the Ancient Greeks produced better examples of physical beauty and grace,’ Hoff said in 1931 of his adopted country. ‘We are so fortunately endowed with almost ideal climatic conditions, we are naturally an outdoor people… We don’t allow our bodies to become flaccid and misshapen through stagnation. The call of the sun and surf, the great open roads and the wonderful bush is all too strong for any to resist. Hence we are active, virile and well… Few nations can show such an average of bodily perfection.’

These beliefs were exemplified in works such as Idyll: love and life 1926 and Australian Venus c1927, while the sexual explicitness of Faun and nymph 1924 was unprecedented in Australian art.

Hoff produced a significant number of small-scale sculptures, exhibiting regularly and entering prizes. (In 1927, he was awarded the Wynne Prize for a bust of artist Len Lye.)

The interwar period also provided opportunities for collaborations with architects in the form of memorial work and a building boom. Hoff’s most visible legacy – along with sculptures on renowned art-deco buildings such as the City Mutual Life Assurance building in Sydney – is the sculptures he and his assistants created for war memorials in Dubbo and Adelaide as well as the Anzac Memorial in Sydney. A masterwork of art deco design, the Sydney memorial commission was also controversial, due to Hoff’s plans to include nude female figures, which were never realised.

Hoff was responsible for another cultural icon: the lion that became the insignia of the General Motors Holden Company, which he created in 1926-27. Other commissions included the medal for the NSW Society of Artists (in 1924, the same year he joined) and John Sulman medal for the Institute of Architects of NSW (in 1931–32).

Hoff was still working on Canberra’s King George V memorial when he died unexpectedly on 19 November 1937, just days before his 43rd birthday. Rayner Hoff’s archive, including his important art library, was donated to the Art Gallery of NSW’s National Art Archive in 2017.

Other works by Rayner Hoff