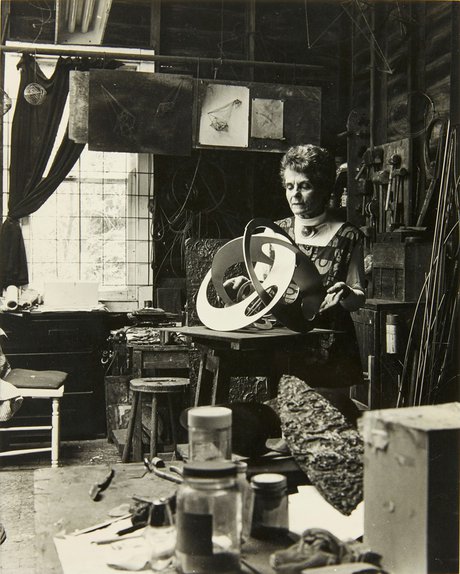 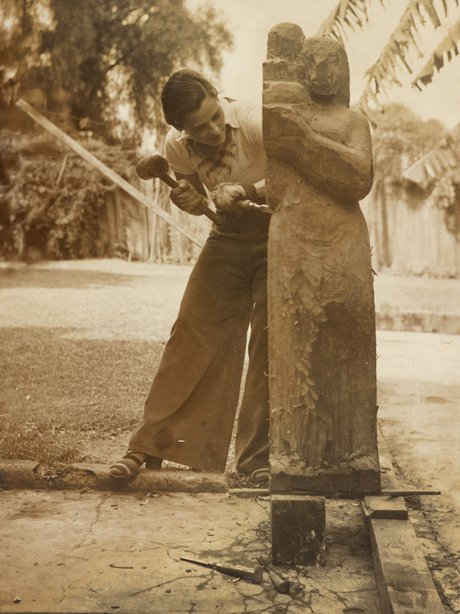 One of the most important and dynamic Australian sculptors of the 20th century, Margel Hinder was pivotal in the evolution of Australian modernism. Her embrace of new methods and materials, and fascination with light and movement, helped signal a new era for sculpture in this country, and her large-scale public sculptures helped modernise previous approaches to public monuments.

Hinder was born Margel Ina Harris on 4 January 1906 in Brooklyn, New York, in the USA and moved with her family to Buffalo, New York State, in 1909. She was interested in sculpture as a child, making models and attending classes at the Albright-Knox Art Gallery from the age of five. She studied under Florence Bach, who taught antique drawing and sculpture modelling at the Buffalo Fine Arts Academy in 1925. Moving to Boston in 1926, she spent three years at the School of the Museum of Fine Arts, learning traditional modelling in clay and plaster from sculptors Charles Grafly and Frederick Warren Allen.

In 1929 Margel met the Australian art and commercial design student Frank Hinder (whom she would marry in 1930), at a summer school at Moriah, New York State, run by the modernist artist and teacher Emil Bisttram, whose teachings on dynamic symmetry (the vital geometric systems believed to serve as the basis for artistic creation and pictorial composition) would inform both Hinders’ approaches to abstraction in their subsequent work.

From 1931 to 1934 Margel attended Frank’s classes, and those of the painter and illustrator Howard Giles, at the Child-Walker School of Fine Arts. In 1933, the Hinders attended Bisttram’s summer school in Taos, New Mexico, which Margel found to be a transforming experience. A sketchbook from this period is in her archive in the National Art Archive at the Art Gallery of NSW. She made her first modernist carving, Taos women, en route to Australia by ship the next year.

In 1939, the Hinders exhibited in Exhibition 1 – the first exhibition of art based on abstract principles – alongside Balson, Crowley, Fizelle, Lange, Gerald Lewers and others. Mother and child 1939 was among the works included.

During the 1940s, Margel Hinder worked on a small but substantial series of modernist carvings that furthered her interest in abstraction as a way of investigating notions of movement and sculptural space. The Hinders spent time in Canberra, where Frank worked with the Australian Camouflage Unit and Margel made wooden models for use in this work. Returning to Sydney after the war, she lectured at the Art Gallery of NSW, taught sculpture at the National Art School, and ran sculpture classes from her home studio in Gordon. In 1949 the Art Gallery of NSW purchased Movement 1945, the first of her works to be acquired by an Australian public gallery.

From the 1950s Margel Hinder entered competitions for public sculpture. In 1953 she was awarded third prize out of 3502 entries from 57 countries for The Unknown Political Prisoner sculpture competition exhibited at the Tate Gallery in England. Her first corporate commission was launched in 1959 when her abstract four-metre-high work known as Growth forms was produced for the Western Assurance Building in Pitt Street, Sydney.

In 1953 Hinder moved from wood carving to working with wire, plastics and metal. Her interest in spatial and shape relations could be thoroughly explored with these materials. This shift in mediums accompanied her growing interest in exploring geometric forms as she sought to achieve movement, light and spontaneity in her work. She was fascinated with the effect of light on surfaces and shapes. First making wall-mounted wire sculptures, she next began working in the round, wanting her works to be seen from all sides. She also made revolving hanging constructions, some turned by electric motors, out of complex arrangements of thin wire. The shadows cast by these works could be viewed as part of the work itself.

During the 1960s Hinder shifted to mainly working on large-scale public sculpture. She fulfilled numerous commissions, with the assistance of Frank, and her work can be found in many cities in Australia, including Adelaide, Canberra and Sydney. In 1962 she was awarded the commission for a free-standing sculpture for the Reserve Bank of Australia, which was installed in Martin Place, Sydney in 1964. Her interest in expressing movement led her to the use of water, and she designed a fountain for Civic Park, Newcastle — a commission awarded in 1961 and completed in 1966, and one of her most ambitious works.

Hinder was awarded several prizes over the course of her career, including the Madach (1955) and Clint (1957) prizes by the Contemporary Art Society, Sydney, and the Blake Prize for Religious Art (sculpture) (1961) — the first woman to receive the prize. In 1979 she was appointed Member of the Order of Australia for her services to art. She died in Sydney on 29 May 1995.

Other works by Margel Hinder