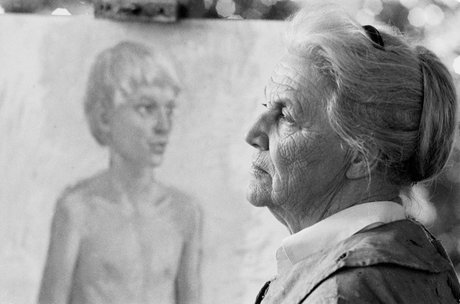 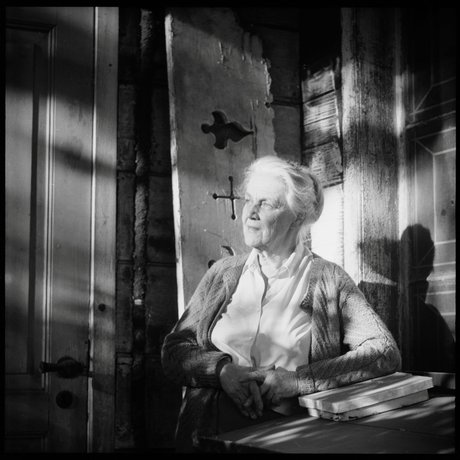 Daughter of renowned landscape painter Hans Heysen, Nora Heysen established her own reputation as a distinguished portrait and still-life painter, becoming the first woman to win the Archibald Prize and to be appointed an Australian official war artist during the Second World War.

Born at Hahndorf, South Australia, the fourth child of Hans and Selma Heysen, Nora received her earliest art training from her father. At fifteen she commenced studies at the School of Fine Arts, Adelaide, under F. Millward Grey, where she received a traditional academic training, learning to draw from plaster casts and live models.

While studying, Heysen continued to paint at her parents’ home, The Cedars, producing a number of self-portraits in her father’s studio, Self portrait 1926 and Self portrait with smock 1928 which, while marked with qualities of introspection and restraint, nevertheless project an assured and assertive confidence of personality. She also produced a number of works inspired by the local landscape such as the drawing Old gum tree, The Cedars, Hahndorf c1928, which was later immortalised in her father’s work.

By the time she was twenty, Heysen’s paintings had been purchased by the state galleries of New South Wales, South Australia, and Queensland. In 1930 she exhibited with the Society of Artists in Sydney, holding her first solo exhibition at the Royal South Australian Society of Arts in 1933. Petunias 1930, which exemplifies Heysen’s principal interest in still life, demonstrates the artist’s clear articulation of form and colour, highlighting her ability to capture the qualities and sensations inherent to her subject. Portraying an immaculate arrangement of objects, Heysen’s style was often critiqued by her father for her treatment of “each flower being seen somewhat separately”. This aspect of Petunias is central to its modernist tendencies and distinguishes her work from her father’s practice.

Characteristic of her work during the 1930s, Heysen’s Self portrait 1932, painted in her father’s studio, expresses her identity and ambition as a young artist channeled through her deeply penetrating gaze. Powerfully composed with precise, strongly defined forms and earthy colours, the portrait recalls European masters of the early Renaissance, and was partially inspired by several Vermeer prints which hung on the studio wall.

In 1934 Heysen travelled to Europe with her family and remained in London for the next four years, enrolling at the Central School of Art from 1934 to 1936 under Bernard Meninsky, James Grant, Alfred Turner and John Skeaping. While in Europe, she travelled to Paris and Italy and worked in the Dorset countryside in 1936 with South Australian sculptor Everton Stokes. Later that year she studied at the Byam Shaw School under Ernest Jackson.

Heysen returned to Australia in 1937, revisiting her old studio at Hahndorf where she painted a number of exceptional, high-keyed works, including Corn cobs 1938. With sumptuous, vivid colour, the painting captures the abundance of fresh corn, demonstrating Heysen’s ability to source subjects from her immediate surroundings. Strong diagonal lines, created by the arrangement of the corn, heighten the dynamism of the composition. The pictorial surface is animated with short brushstrokes – exemplifying the artist’s impressionistic approach – while the interplay between tone, form and light evokes a sense of immediacy in the work.

Settling in Sydney, Heysen became a member of the Society of Artists and in 1938 won the Archibald Prize, the first woman to have done so, for her portrait of Madame Elink Schuurman. She was also the first woman to be appointed an official war artist, during the Second World War. She was stationed at Port Finschhafen, New Guinea, represented in Port Finschhafen, New Guinea in the Gallery’s collection, from 1943 to 1946 where she met Dr Robert Black, a specialist in tropical medicine. Marrying Black in Sydney in 1953, she frequently travelled to New Guinea and the Solomon Islands with her husband where she made several paintings and drawings of the local people and landscape as revealed in a seated portrait of King Mitakata, New Guinea 1953.

Heysen continued to exhibit in South Australia and New South Wales throughout her career. She had her first retrospective exhibition in 1984 at the Old Clarendon Gallery, South Australia, followed by others at the National Trust S.H. Ervin Gallery, Sydney, in 1989, and the National Library of Australia, Canberra, in 2000. More recently, her work featured in the travelling exhibition Nora Heysen: Light and life held in 2009.

Other works by Nora Heysen