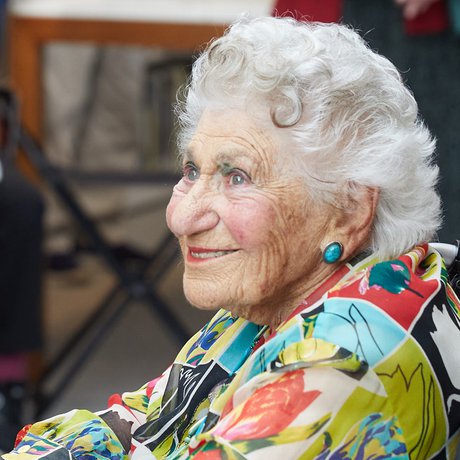 Ruth Faerber at her 100th-birthday celebration at the Art Gallery of New South Wales, October 2022

Ruth Faerber is an innovative artist who played a pivotal role in pioneering lithography practice in Australia, before developing a unique form of paper relief sculpture.

Born Ruth Levy in Sydney in 1922, Faerber was inspired by her high school art teacher Gladys Gibbons, a painter and printmaker active during the period between the First and Second World Wars. Intent on becoming an artist, Faerber enrolled at the age of 17 in Peter Dodd’s Commercial Art School. There she was exposed to modern art through Dodd and his artist associates such as Frank Hinder and Justin O’Brien.

During World War Two, Faerber found employment at the Market Printery, where commercial print production gave her a grounding in the processes that would define her later career. A formative experience between 1944 and 1947 was the tuition of Desiderius Orban at his art school. A Jewish–Hungarian painter who had fled the Nazis, Orban introduced his students to cubism and the art of Paul Cézanne and cultivated an unorthodox attitude of experimentation.

After marriage and the birth of two children, Faerber continued to develop her work. She took part-time art classes at East Sydney Technical College (now the National Art School) and turned the family garage into a studio. When Joy Ewart – another former student of Orban’s – set up the Workshop Art Centre in Willoughby in 1961, Faerber’s love of printmaking flourished. The centre hosted Sydney’s only public studio for lithography, a medium Faerber was drawn to for its immediacy. She once said, ‘Lithography as a medium appeals because of its direct, spontaneous quality – the mark becomes the print. My images develop more often than not out of the discoveries I make during the process, only conditioned and refined by a search for form and space relationships’. In works such as Figures in the night, now in the Art Gallery of New South Wales collection, her skills in dynamic mark-making and colour layering are clearly visible.

In the 1960s and 70s Faerber rode a wave of growing interest in the graphic arts in Australia, a phenomenon supported by European émigré artists, who brought with them a strong tradition of printmaking. In 1963 she held her first solo exhibition consisting of paintings and lithographs at The Little Gallery. Exhibitions of her prints at Stadia Graphics, Bonython Gallery and The Blaxland Gallery followed. A successful application to the Pratt Center for Contemporary Printmaking sent her to New York in 1968. Faerber was impressed by how modern technologies were being absorbed into the art coming out of New York, such as Robert Rauschenberg’s integration of photographic images within printmaking. She went on to pioneer this technique in Australia, along with the use of spray paints in lithography.

Faerber was sometimes limited by the standard sizes and costs of imported printing papers. Wanting to make her own, in 1980 she signed up for the first professional papermaking workshop in Australia at Hobart’s new Jabberwock paper mill, part of the Tasmanian School of Art. After laying down a sheet of wet paper the wrong way and finding it dried into an irregular shape, she changed the course of her practice: ‘I thought, “How interesting” … I could make artworks not on paper but in paper’.

Faerber started casting paper pulp in her own moulds to create both one-off and editioned reliefs. Her modelled impressions in paper had the appearance of bas-relief in stone, which for Faerber carried profound historical resonances. She soon began tinting the sculptural shapes with earthy pigments, creating deep shadows, like an ancient carving seen in firelight.

Works such as Excavation 3, also in the Art Gallery collection, were inspired by an interest in archaeology and travels to places like Pompeii and Jerusalem. They were also borne out of a concern for political issues, such as war and nuclear proliferation. Faerber felt that by invoking a sense of the eternal through sculpture and a universal pattern language, she could draw attention to humanity’s common roots and bonds across time. Her relief works are considered highly original in the realm of paper arts and became the focus of her practice for over three decades.

Over her career, Faerber was awarded several prizes. She was represented in the Archibald, Wynne and Sulman Prizes with 19 works between 1955 and 1997, including portrait and landscape paintings and mural designs, winning the 1980 Pring Prize for best watercolour by a woman artist. Alongside her art practice, she worked from the 1960s onwards as art reviewer for the Australian Jewish Times. She also maintained a teaching career and was at one stage tasked with establishing the lithography department at the College of Fine Arts, Sydney.

Ruth Faerber’s archive is held in the Art Gallery’s National Art Archive, along with an extensive interview with the artist.

Other works by Ruth Faerber