Now in his second century and still producing and exhibiting, Erwin Fabian is the elder statesman of Australian sculpture. He is known for his abstract pieces created from scrap metal, but his body of work also includes paintings, drawings and prints.

Fabian was born in Germany in 1915, the son of painter Max Fabian (1873–1926). He studied drawing at the School of Art and Craft in Berlin before fleeing to England amid mounting racial tension in 1938. In London, Fabian took art classes at night and spent his days at the Victoria and Albert Museum library, teaching himself about art.

With the outbreak of the Second World War, Fabian was interned as an ‘enemy alien’ then deported to Australia on the Dunera in 1940 and interned again at camps in Hay, Orange and Tatura. On his release in 1942 he served with the Australian army until the war’s end. In 1950 he moved back to London where he worked as a graphic designer for 12 years before returning to settle in Australia.

Until this time Fabian had worked primarily with works on paper, particularly monotype prints. In 1962 he began to make free-formed metal sculpture from scrap metal. He held his first solo exhibition in 1965 at the Hungry Horse Gallery in Sydney. As well as large monotypes, he showed assemblages he had made using wood and scrap metal collected in the bush outside Melbourne.

‘I got onto working with scrap because it’s what I found in the bush or at scrap yards or from a timber mill. I didn’t start with a nice clean piece of marble or steel. I started with something which I’d found attractive looking. Trying to produce something or make use of these things because they were there, I find that fascinating,’ he said in 2015 in an interview for the Art Gallery of NSW archive.

To create his works, he draws from a large scrap pile that he has been collecting since the 1970s, many of the pieces showing signs of rust and age.

‘You pick things up that you think might come in handy. I … hardly ever pick up things and think, “I’m going to use that in this way”.’

Fabian works primarily in steel, such as in the work Enclosure 1977–79 in the Art Gallery of New South Wales collection. However, in recent years he has experimented with using discarded plastic to shape his forms, then casting them in steel or bronze.

His sculptures evolve from the material itself, and he considers his drawing – which is often figurative – an independent practice.

Fabian’s works are held in institutions in Australia and overseas, including in the British Museum. In 2000–01, a large retrospective exhibition, Max und Erwin Fabian: Berlin – London – Melbourne, was held in the Stadtmuseum Berlin featuring his work alongside that of his father. 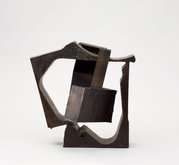