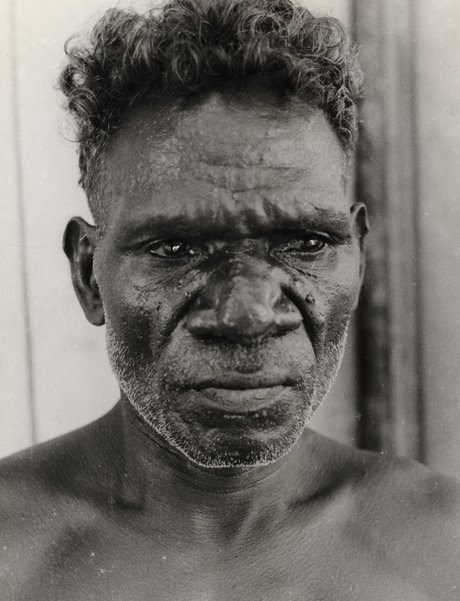 Dick Binyinyuwuy Djarrankuykuy was among the younger generation of artists working at the small island of community of Milingimbi in Arnhem Land during the 1950s. His fine skills were recognised early and he was encouraged to create artworks for sale through the Methodist Overseas Mission.

Ann Wells, the wife of the mission superintendent from 1949, describes the young Binyinyuwuy as a ‘rebel, only visiting the station to raid the store or make havoc among the young women … After one successful raid he sent a defiant message … that he would return and repeat the performance when he pleased’.

Following this open declaration of contempt for the mission and for balanda (whitefella) ways, Reverend Edgar Wells consulted the community elders, who advised there was one thing Binyinyuwuy could do better than most: paint and make sacred objects. It was decided that his past actions would be forgotten if he brought a peace offering in the form of a painting. As Ann Wells recalls, ‘the painting was so good that he was promptly added to the list of artists and the money he earned was so good that he stayed’.

On accepting the dignified status of an artist, Binyinyuwuy produced an extraordinary number of exquisite works in the form of bark paintings, carvings and paperbark sculptures. They refer to diverse subject matter, reflecting Binyinyuwuy’s various kinship connections. He is known to have painted birrkulda (honey), wurrpan (emu), wan’kurra (bandicoot) and the Djalumbu (hollow log) ceremony of his mother’s clan, the Ngulmarrk ceremony and wititj (olive python) of his Ganalbingu maternal grandmother, and subject matter belonging to his own clan, the Djambarrpuyngu.

In Därrpa (king brown snakes) – Djambarrpuyngu rain story c1950s Binyinyuwuy refers to his own identity as a man of the därrpa, or king brown snake people. In the work he gives rudimentary form to numerous representations of därrpa. Delineated with roughly applied white outlines, the snakes are set against a bold background of striped solid colour and boldly adorned with linear dashes. The därrpa extend skyward, in an attempt to pierce the clouds and initiate rain. The somewhat crude execution of this work is at odds with the majority of Binyinyuwuy’s painting, which is of refined elegance. This may indicate that it is among his earlier works, as it is similar in style to Banumbirr (morning star) 1948.

Binyinyuwuy was only a young man at the time of painting Banumbirr (morning star) and it is perhaps the earliest work by him to have been collected and attributed. The work was made as part of the American and Australian Scientific Expedition to Arnhem Land, led by Charles Mountford, which resulted in a collection of several hundred Aboriginal objects and artworks. Among these were a number of paintings on heavy card, as used in this work. Given his young age at the time and the use of this new medium to which he would not have been accustomed, the jerky nature of the line work is understandable.

In Trees and flying fox camp c1950s Binyinyuwuy provides columns of the Ganalbingu rarrk for water, alternating with the clustered floral design for the flying fox. In form this design echoes the flowers from which the bats draw nectar, while also representing their droppings that fall into the water as they fly to the nearby paperbark forest, providing the water with power. Binyinyuwuy inherited the rights to paint this Ganalbingu design through his maternal grandmother. On viewing the work, Yolngu scholar Dr Gumbula was able to compare the painting with the objects each titled Bulman (ceremonial spear-thrower) c1950s and thereby identify the artist of these objects as Binyinyuwuy, which was subsequently confirmed by his family in Milingimbi.

Binyinyuwuy had distinguished status within the community and a leading role in ceremonial life. Along with his younger brother Djatjiwuy, he was very active in ceremonial life at Milingimbi, Nangalala outstation and Ramingining, which allowed for an alternate outlet for his art-making expertise as he realised sand sculptures and sacred objects for ceremonial use.

Binyinyuwuy was among the group of Yolngu men enlisted as part of Donald Thomson’s Special Reconnaissance Unit, who were tasked with protecting Australia’s northern coastline during the later stages of World War II. In 1948 he worked with the archaeologist Frank Setzler to excavate at the Macassan Well in the course of research undertaken for Mountford’s expedition, and appears in Fred McCarthy’s images of the event. He also worked with the patrol officer Syd Kyle-Little, who spent considerable time in Arnhem Land from 1947 and recounted his memories in the publication Whispering wind: adventures in Arnhem Land (1957), which includes photographs of Binyinyuwuy alongside the author.