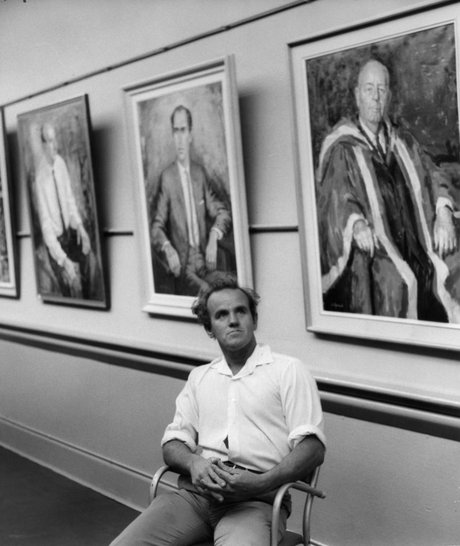 Robert Dickerson at the Archibald Prize 1965 exhibition, in which he had a portrait of CC Gheysens displayed. Source: Art Gallery of New South Wales Archive

A self-taught painter, Robert Dickerson was a founding member of The Antipodeans art movement. Inspired by people and scenes of everyday life, his work is often described as melancholy, with isolated figures, menacing dark streetscapes and anguished facial expressions characterising his painting.

Born in the Sydney suburb of Hurstville and raised in inner-city Surry Hills in straitened circumstances, Dickerson was a child of the Great Depression. He left school at 14 to work in a factory, taking up boxing as a hobby and turning professional at 16. Two years later he joined the Royal Australian Air Force and spent time in Darwin and South East Asia during the Second World War, where he made drawings in his downtime. He began to paint in 1947. Of finding his affinity for art he said: ‘It was terribly exciting. I knew I had stumbled on the most important discovery about myself that I’d ever make.’

Dickerson continued to work menial jobs while painting in his spare time, finally becoming a full-time artist in his mid 30s. In 1957 he was commissioned by Australian Women’s Weekly magazine to decorate a Kelvinator fridge for a promotion. It is said he bet the 100-pound fee on a horse race and his winnings funded his move into a career as an artist.

Dickerson came to prominence in 1959 as part of The Antipodeans exhibition, comprising a group of figurative artists including Arthur Boyd, Charles Blackman, Clifton Pugh and John Perceval, among others, who were against abstract expressionism. A portait of Perceval by Dickerson is in the Art Gallery of NSW collection.

In 1964 Dickerson stated: ‘I try to paint something that will be different from all the rubbish everywhere. Everybody is trying to run away from facing certain issues. My work is a protest against that if you like; but I am not trying to prove something. I just paint what I feel like painting.’

In 1971 Hal Missingham, the then director of the Gallery wrote: ‘…the most endearing thing about Bob’s pictures is that they are about humans, not effigies or abstractions, not cerebral adventures but a straight-out interest in people and their astonishing situations and commitments.’

Dickerson continued to paint and exhibit regularly for the next five decades before his death in Nowra, on the New South Wales south coast, in 2015.

Other works by Robert Dickerson