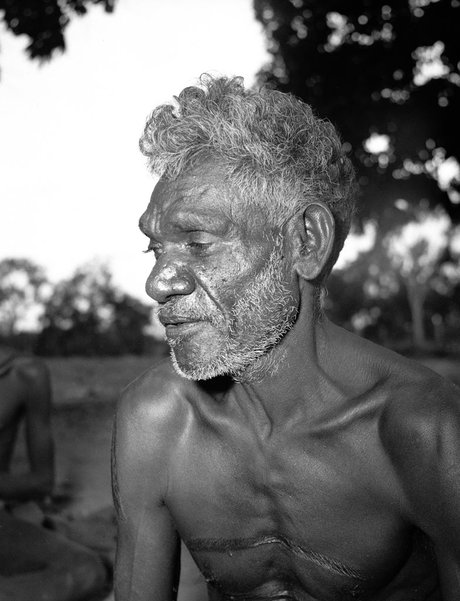 ‘One morning Dainanan [sic] was carving the finishing lines on a ceremonial pipe, beautifully carved in lines and diamonds, with the tiny outline of a turtle on it. I admired it very much as they told me something of the story about it … Dainanan took the pipe to my husband. ‘Nandi wants him,’ he said, so my husband bought it for me and I received a most pleasant surprise. It was a personal thing of worth from Dainanan’s own ceremonial use; although he was given some payment for the work in it, it was really a gift from the old man, a gift of something precious to him.’ – Ann Wells

Over time Johnny Dayngangan became a ‘real friend’ to the balanda (whitefellas) in the small Arnhem Land community of Milingimbi, particularly the then mission superintendent Reverend Edgar Wells and his wife Ann. Prior to this time Dayngangan had been known to throw spears and boomerangs at the mission, at one stage even being banished to another island, Rabuma, with his family as punishment for his actions. While this incident may provide an image of defiance and aggression, it can also be viewed as strength; it reflects Dayngangan’s stoic belief in the cultural and social life he had experienced in the first decades of his life that had been irreversibly interrupted by the arrival of missionaries in 1923.

Among the Yolngu Dayngangan held particular power, for he had been struck by lightning and survived; Northern Territory patrol officer Syd Kyle-Little explains, ‘As a result of this very serious association with the gods, [he] was a man to be respected.’ While he was not a ceremonial leader, he was a revered elder and was described by the mission reverend Harold Shepherdson as ‘the agent provocateur’ during the clan feuds at Milingimbi, which culminated in a Makarrata (a ceremony to resolve disputes).

Dayngangan was one of the main collaborators with Paris-based artist and collector Karel Kupka. Kupka acquired substantial collections for European institutions, greatly enhancing the knowledge of bark painting on a world stage. He also wrote of his appreciation of Aboriginal art, even profiling Dayngangan in an article in the Journal de la Société des Océanistes in 1964, a rare occurrence for an Aboriginal artist at that time.

The work of Dayngangan is distinguished by even bands of cross-hatching, rendered in repeating sequences of red, white, yellow and white. In Two ancestors, a dream prior to circumcision 1959, elegant line work in yellow delineated with white defines the figures, while the distinct use of black draws attention to the faces and genitalia. The regularity of the cross-hatching forms both the adornment on the figures and the background design, the subtle shift in alignment between the two establishing a refracted surface effect.

In Warrukay (barracoota) and yalurr (saltwater snake) 1961 Dayngangan provides a very different impression, with the golden background forming a brilliant plain onto which he carefully paints his figures. Such is their placement that the elongated upper lip of the warrukay at the centre of the work is used to define two segments within the form of the yalurr. This balance is echoed in the infill of the snake, where Dayngangan has used only one segment of cross-hatching, set against white dotted fields on black and yellow, as well as a section of brilliant white devoid of any surplus detail. He offsets these details in the forms of the warrukay, resulting in a vivid representation of the animals.

Other works by Johnny Dayngangan