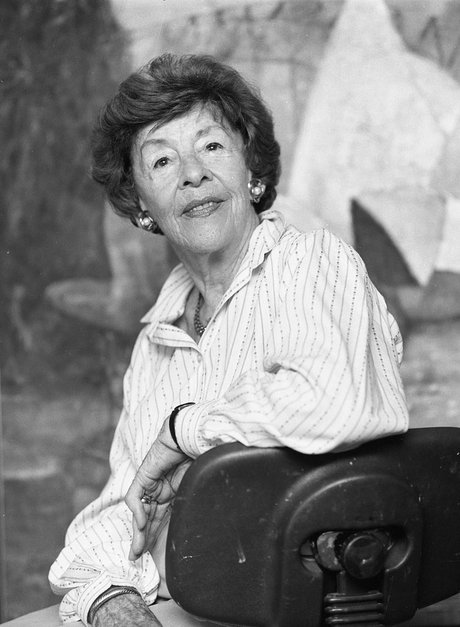 A two-time winner of the Archibald Prize, Judy Cassab was a portraitist of immense insight and imagination, seemingly able to capture not only a sitter’s likeness but the spirit of their times. As well as painting social luminaries, royals, fellow artists, family and friends, she was also a prolific draughtswoman and an acclaimed landscape artist.

Born Judit Kaszab in Vienna in 1920 to Jewish Hungarian parents, Cassab started painting at the age of 12. She began her formal studies at the Academy of Art in Prague in 1938 but these were cut short by the oncoming Second World War and she was forced to flee the German occupation in 1939. She resumed her studies in Budapest in 1941 with Aurel Bernath and Lipot Hermann – the same year her husband Jancsi Kampfner was conscripted to work in labour camps (she had married him in 1939 on the condition that she be allowed to pursue a career as an artist). After the war Cassab and her husband learnt that their immediate families had died in Nazi concentration camps; Cassab herself evaded persecution during the war by posing as her family’s Catholic maid.

The couple moved to Sydney with their two sons in 1951, settling in Woollahra. In the following years Cassab established herself as a portrait painter of considerable renown, rendering her subjects with an expressionist style influenced by European modernists.

In 1953 she held the first of what would be more than 70 career solo exhibitions, but it was in 1960 that she came to public prominence when she became only the second woman to win the Archibald Prize, for her portrait of fellow artist Stanislaus Rapotec. In 1967 she was the first woman to win the prize for a second time, for her portrait of Margo Lewers. The Art Gallery of NSW acquired both these works and later her portrait of Hal Missingham, then director of the Gallery, which was a finalist in the 1970 prize. Overall, Cassab exhibited 41 works in the competition between 1952 and 1998. (She also won several watercolour awards for landscape works in the Wynne Prize competition between 1973 and 2003.)

In 1959, at the suggestion of author and journalist Frank Clune, Cassab made a journey to Alice Springs. It would be the first of many to the central desert over the next three decades.

My eyes burn from the vivid colours of the day. I have never experienced this. Colour has always been something which pops up here and there in spots and hues, something on which the painter’s glance focuses. Here, it’s a physical force, hitting you not only frontally but sideways and from the back … I understood, for the first time since arriving in Australia, that one can love the soil.

The forms Cassab encountered in the landscape inspired her to escape from the strictures of being a purely figurative artist. She was encouraged to explore abstraction by the Swiss artist Paul Haefliger, art critic for Art in Australia and the Sydney Morning Herald: ‘Do you want to be a fashionable portraitist or do you want to be an artist? Try something you haven’t tried before, for God’s sake. Try abstract’.

Detail of Ormiston 1959, painted in her Sydney studio from an oil study made on site, is one of her earliest paintings of central Australia and a radical departure from the familiar human figures of her earlier works.

But even as her interests moved towards abstraction in the desert, Cassab continued to draw and paint portraits. In 1984 she compiled a portfolio of lithographs of eminent Australian cultural figures, including artists Donald Friend, Sidney Nolan and Lloyd Rees.

Cassab was made a commander of the British Empire in 1969, then an officer of the Order of Australia in 1988. In 1980 she became only the second female trustee of the Art Gallery of NSW trustee. In 2011 she was awarded Hungary’s Gold Cross of Merit and in the same year she generously donated 400 of her works to small Australian galleries. She died in Sydney in 2015, aged 95.

Other works by Judy Cassab