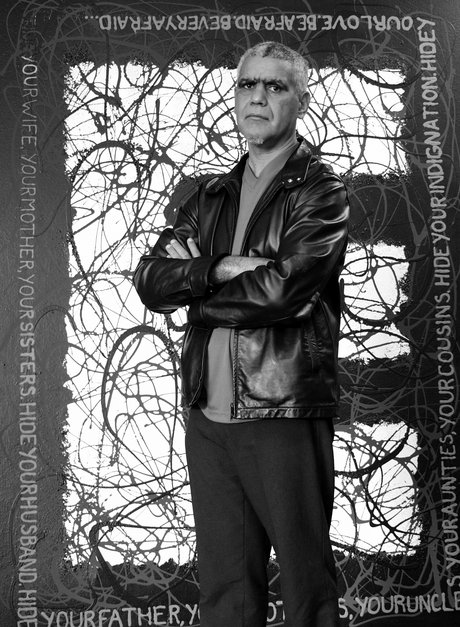 Richard Bell warns in the introduction to his ‘Bell’s Theorem’ that his thesis will be ‘ … conversational, playful, serious, tongue in cheek, moralistic, tolerant, sermonistic and informative’. Aboriginal culture, Bell believes, has become a commodity, slowly being digested by Western society. Within this system, Aboriginal artists are either ‘tribal’ people living in the ‘outback’ – whose work is fair game for appropriation – or ‘urban blacks’ whose cultural ‘authenticity’ has been disenfranchised by the brutal process of colonisation. Speaking as a member of the Murri community, Bell states, ‘ … Our culture was ripped from us and not much remains. Most of our languages have disappeared. We don’t have black or even dark skin. We don’t take shit from you.’ It was this philosophical bent that led to the formation of the radical collective proppaNOW in 2003, when a group of Brisbane-based Aboriginal artists, including Bell, Vernon Ah Kee and Tony Albert, decided to take matters into their own hands.

In Pay the rent, 2009, Bell reveals his activist roots, reinventing a land rights demonstration placard as a work of fine art. The self-proclaimed ‘enfant terrible’ of Australian art, Bell wilfully uses and abuses the sacred cows of painting from Jackson Pollock to Colin McCahon, describing his role as ‘ … very similar to Pablo Picasso’. His mantra is one of free artistic appropriation and influence, with the political ends justifying the artistic means. Closer to home, Bell’s paintings often make generic reference to the pictograms of rock art and desert painting. In Devine inspiration, 1993, a palimpsest of stencilled images and concentric circles is overwritten with an alphabet that begins with ‘Abos, Blacks, Coons … ’ – an ‘ABC’ of racist language particular to Australia. It concludes with a withering sequence of words damning the oppressors of Indigenous people as ‘ … Very Weak Xenophobic Yobbo Zookeepers’. Bell’s invective is tempered by humour, a strategy to sugarcoat the ideological pill, ensuring that his mouthful of political homily will stick in the throat.

Bell assaults the many fronts of Australian racism, from its most covert manifestations to everyday forms, from nursery rhymes and remarks bandied around the schoolyard to the subversive use of language. Bell hijacks language, the vehicle of Western power, and drives it headlong into the class barriers that disenfranchise minority societies. As George Petelin has written, ‘ … Culture for [Bell] is not something of the past but part of a daily struggle’

Other works by Richard Bell