What’s on Art After HoursWorkshop 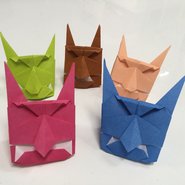 Grab a drink and join us for a drop-by origami workshop led by artist Midori Furze and inspired by the Japan supernatural exhibition. Test your folding skills and create paper Japanese spirits, known as yōkai.

Midori Furze is a Sydney-based contemporary artist and origami specialist. Born in Japan, her early years were immersed in the traditions of Japanese culture, with many of her family members being masters of disciplines including calligraphy, tea ceremony, flower arrangement, Noh dancing and traditional musical instruments, such as koto, shamisen and shakuhachi.

Her fascination in music, literature and people gives her endless inspiration. She paints her dreams and concepts of love and music on her canvases. She also creates unique origami artwork. Her work is held in private and corporate collections in the UK, Europe, USA, South America, Japan and Australia. After the 2011 Japan disaster, Midori started an origami project called 'Fold with love’ and runs workshops and projects at numerous venues around Sydney. Midori is also a community ambassador for the Art Gallery of NSW.