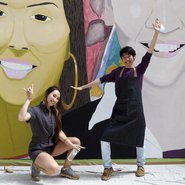 Studio A artists in conversation with Yumi Stynes

Celebrating the individuals and communities that got us through 2020

2020 has been a year like no other and it is important to reflect on the people and communities that have helped us to make it through. Seven artists from Studio A have done just that with their epic, colourful mural that spans the length of the Gallery’s entrance court, Love owls and mermaids singing in the rainbow pop. The mural depicts a person or a being who has supported and inspired each artist during 2020: fellow artists, writers, friends, family, pets and imaginative companions. For our final Art After Hours Online talk this year, Yumi Stynes speaks with two of the artists Meagan Pelham and Jaycee Kim, as well as Studio A Artistic Director Gabrielle Mordy, about the experience of creating the mural – an electrifying declaration of the power of love and a celebration of unity.

Studio A is a supported studio based in Sydney Australia that tackles the barriers that artists living with intellectual disability face in accessing conventional education, professional development pathways and opportunities needed to be successful and renowned visual artists. This talk coincides with International Day of People with Disability and celebrates the Gallery’s longstanding respect, collaboration and support for artists living with disability.

This talk will be Auslan interpreted and live captioned.

Meagan Pelham has an established practice in painting, drawing and performance. She has exhibited widely, including at Casula Powerhouse, SCA Galleries and Artbank, and has undertaken major collaborations with Erth Visual and Physical Inc., Koskela Creative Studio, Red Room Poetry, Cicada Press at UNSW and Australian fashion label Romance Was Born. In 2019, along with six other Studio A artists, she produced a 175 square metre mural for the University of Technology Sydney, titled Bird Life Jungle Disco. For the Studio A mural project at the Art Gallery of New South Wales, contributed a self-portrait with her mother Maija, who she has been living with during the pandemic. The original drawing was completed as a Mother’s Day gift in honour of their relationship.

Jaycee Kim is a Sydney based artist who works predominantly in watercolour and acrylic, with a vibrant colour palette inspired by his favourite video game Kingdom Hearts. Jaycee was the 2019 recipient of the Studio A Professional Pathways Award. Under the mentorship of Christopher Haysom, Studio A’s principal digital artist, Jaycee is exploring video, animation and augmented reality. Jaycee’s first presentation of work in the group show Mobile Colour at Cement Fondu included augmented reality wallpaper (Postage Stamp Colour Palette, 2020), a bespoke chess set with each piece made in his own image (Jaycee’s Ultimate Chess Board Battle, 2020) and a series of self-portraits as his various alter egos; a Loreto school girl, a Disney Princess and a rainbow gymnast. For the mural project at the Gallery, Jaycee has represented the female and male aspects of his identity, painting himself with artist Bhenji Ra, who offers Jaycee creative inspiration.

Yumi Stynes is a writer, broadcaster and music and art fan. Her fourth and fifth books will be out in 2021 and she’s keeping busy on the KiiS network with her national afternoon radio show, 'The 3pm Pickup’. Her most recent book, 'Welcome to Your Period’ won an ABIA Award for Book of the Year for Young People and has been translated into Russian, Chinese, Spanish and German, among other languages. In her spare time, Yumi goes to the Art Gallery of New South Wales and goes running. Sometimes she runs to the Gallery!