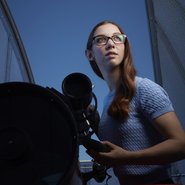 We are launching Art After Hours Online with stargazing! Walkley-award winning journalist, TV Presenter and internet commentator, Jan Fran, is joined by astrophysicist Kirsten Banks to explore the constellations present in our night sky and in the art featured in the Under the Stars exhibition. Looking at the cosmos from both an Indigenous and Western perspective, Kirsten unpacks some of the formations that we have gazed up at for thousands of years.

Taking a transhistorical approach, Under the Stars presents stargazing and mapping by Indigenous and non-Indigenous artists, highlighting the commonalities and connections in our shared attempts to understand the night sky and our place in relation to it.

Kirsten Banks is a proud Wiradjuri Woman with an undeniable passion for space and astronomy. Her love for the stars blossomed after watching the Hubble Documentary in high school. Kirsten pursued a degree in physics and was awarded honours with first class in 2019. Now, Kirsten is a Scientia PhD candidate at the University of New South Wales where she is closely studying stars in the milky way galaxy. Kirsten is known for her engaging and entertaining communication about the universe around us. She has appeared on ABC Mornings with Wendy Harmer and Robbie Buck, spent some time behind the desk on ABC’s The Drum and Q&A programs. Kirsten has also spoken at major events such as TEDxSydney Youth and Splendour in the Grass in 2019.

Jan Fran is a Walkley-award winning journalist, TV Presenter and internet commentator. She’s best known for her work on the podcasts The Briefing and The Pineapple Project as well as TV shows The Project and The Feed. Jan is also the creator, writer and presenter of the online opinion segment, The Frant, which has been viewed more than 20 million times on social media and which earned Jan a 2019 Walkley award for Best Commentary, Analysis, Opinion and Critique. Jan has shot and produced documentaries from all over the world, and has appeared as a commentator on Q&A, The Today Show, Studio 10, ABC Breakfast, The Latest and The Drum. Her memoir Of Middle Eastern Appearance will be published in 2021 by Hachette.

Related exhibition: Under the stars