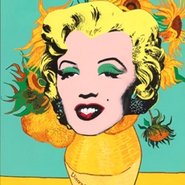 Hear from the experts

The Gallery’s summer exhibition Pop to popism is one of the most ambitious exhibitions curated here for some years. Featuring 200 works by over 70 of the greatest pop artists borrowed from around the world, the exhibition spans three decades from the mid 1950s to the 1980s. It traces the origins of pop art, its heady high period and its enduring legacy both in Australia and abroad.

This series of lectures consists of four parts and is presented by eight experts in the field including the exhibition curator Wayne Tunnicliffe. The lectures will provide you with context and insight into the period in which pop art exploded onto the cultural scene. The pop artists rebelled against ‘high art’ to embrace the new world of advertising, television, film stars, pop music and consumerism. Pop art shocked many but inspired even more.

Link above is for subscription booking

Cancellations:
Three full working days (Mon–Fri) notice is required to qualify for a refund. All refunds attract an administration charge of 25% of the ticket price(s) with a minimum charge of $5. With subscription tickets there are no refunds for single sessions, unless a session is cancelled. Not negotiable.

The future is now: origins of pop art / The making of pop

Pop art arrived suddenly like a cartoon explosion in 1961-62, but where did it come from? Exhibition curator Wayne Tunnicliffe discusses how and why the first pop artists drew on the popular culture worlds of advertising, consumer goods, television, film, comics and music for new subjects and styles. This talk will focus on iconic early works by British and American artists including Richard Hamilton, Peter Blake, David Hockney, Andy Warhol, Roy Lichtenstein and James Rosenquist. It will also explore the first pop art and exhibitions in Australia.

While there’s a tendency to think of pop works as cool, mechanical and 'hands-free’, many artists worked intensively with new materials and techniques, often entering into long-term research and development relationships with manufacturers and suppliers. This lecture will explain the elaborate studio procedures underpinning the supposed mechanisation of pop art.

This lecture focuses on the musical figure most associated with the history of pop art – John Cage. More than anyone else Cage reimagined what music might be and many of the early pop artists were directly influenced by his work. He is best known for his silent music 4’33”, the radicalism of which made him one of the best known musicians of the 20th century. His important associations and connections with many pop artists will be explored in this lecture.

Style gangs formed and rebellion was in the air. A new language of love was setting the post-war world afire. The vast corpus of Romance magazines, those that inspired Lichtenstein, embodied a full-on revolution of the emotions. But this youth revolt was so romantic in essence that it sparked a counter-revolution that was equally angst-ridden and headed towards punk. In this talk we assess who won the post-war pop youth revolt.

Pop art challenged prevailing ideals of art and culture. In the 1960s and 1970s radical feminists also challenged the status quo. In tandem with the rise of consumerism, Cold War fears that bred conformity and rock 'n’ roll, women in the postwar decades were idealised as domestic supports for men and children. Prescriptions of ideal womanhood denied the extent of women’s contributions to society and were at odds with the economic imperative for many women to work. These prescriptions stymied female desire and ambition. The women’s liberation movement grew out of this context. Its radical core sought a revolution in sex roles and changed popular consciousness about gender and sexuality.

From Lichtenstein and Warhol through to Barbara Kruger, the images of women in pop art were often produced with heavy doses of irony and wit. They reveal a telling discourse of the attitudes towards women and their changing roles in society during an era marked by consumerism and a reliance on advertising.

At the end of the 1970s pop art’s trademark strategies resurfaced in the work of a younger generation of artists. They drew inspiration from the world of images in new and critical ways, further challenging ideas of authorship and originality. In Australia this postmodern tendency was known as 'popism’. This lecture examines this particular moment in Australia’s recent art history and its connection to new ways of thinking about identity and place.

In 1973 the New York curator Henry Geldzahler predicted that 'Andy’s going to feed a lot of artists for a long time’. With his mass produced techniques and anything-goes subject matter, Warhol opened up a whole new way of working for artists. His impact on the art world continues to be felt even today. With the Pop to popism exhibition and era ending roughly with Warhol’s death in 1987, this lecture considers his enduring legacy and influence on artists from Australia and around the world.