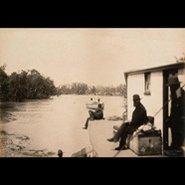 Join us for our annual symposium exploring current approaches to photographic history and theory.

Just as 95% of the known universe is made up of the currently undetermined material scientists call 'dark matter’, so too are the photo archives of the world. The Dark matter symposium will provide insights into historical photographs and photographic histories, and show how these histories in turn illuminate our present.

Hear from invited scholars about the development of photography in the antipodes, the reconstruction of histories here and elsewhere, and how previously unidentified subjects have been discovered through archival research.

True to the medium of photography, Dark matter encapsulates both the speculative and proven aspects of reading and rereading photographs. The symposium explores how photographic objects and their subjects can be interpreted across time, in order to facilitate points of re-entry and discovery.

11am Symposium welcome and introduction

11.35am Keynote address
Australia and photography: a reckoning

Addressing itself to the problem of presenting a nation-based history of photography, this paper points to a surprising range of photographic material that infiltrated Australia’s borders in the 19th century, suggesting that a tracing of these refugees quickly complicates our traditional notions of both 'photography’ and 'Australia’.

1.30pm Ghost-hunting: an archaeologist and his archive

Osbert Guy Stanhope Crawford was a British archaeologist best known for pioneering the use of aerial photography after his experiences in the First World War. When he died he left his photographic collection, including all of his negatives and a number of albums, to the Archaeological Institute in Oxford. The photographs contained some surprises that had been largely invisible or irrelevant to the working archaeologists from the Institute who had used the archive over the years for practical purposes. What emerged from the archive of photographs was a sort of self-portrait, but one that was fractured and anamorphic. Re-constructing the man from the archive was the project for Kitty Hauser’s book Bloody Old Britain (2008) and it involved issues of interpretation germane to the practices of archaeologist, spy and historian.

For almost 30 years Michael has been researching photographs of Aborigines from south-east Queensland. By identifying who took particular images and confirming when and where these photographs were taken and by researching the lives of individual Aboriginal people, it has enabled him to determine who exactly may be featured in previously unidentified photographs.

Michael will discuss what has motivated him to carry out this research over such a long period and some of the research methodologies used. In particular he will discuss the ways he has approached presenting this information in books and publications and in turn making this research accessible to the Aboriginal community.