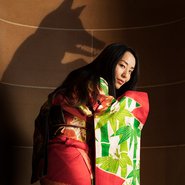 In Japanese folklore, twilight is the time when the supernatural world awakens, everyday objects become enchanted and shapeshifters and trickster spirits take to the streets. Sydney’s absurdist innovators Clockfire Theatre Company unlock the ghostly realm that lurks alongside our own in Night parade of one hundred goblins.

This highly physical theatre experience, propelled by live taiko drumming, will bring the works in Japan supernatural to life in a fantastical, otherworldly procession. The exhibition will be filled with a heady soundtrack by Tokyo-based musician Eiko Ishibashi, composed especially for this Sydney Festival event, alongside the murmurings of kyōka (Japanese ‘mad poetry’).

Co-presented by Art Gallery of NSW, Sydney Festival and Clockfire Theatre Company. The performance is made possible by the generous support of Gandel Philanthropy, Carole Lamerton, Kiera Grant, Robyn Martin-Weber.

Clockfire Theatre Company is an independent Australian theatre company based in South-West Sydney who create highly visual and physical performance through a process of intensive collaboration.​ The work incorporates the skills of artists from an array of disciplines who collectively contribute to the creative process. As an ensemble, some members have studied at the Jacques Lecoq Theatre School in Paris, devising work in locations including the Musée du Louvre and the Centre Pompidou. Night parade of one hundred goblins is co-directed by Artistic Director Emily Ayoub and Ensemble Member and Japanese-Australian performer Arisa Yura.​

Eiko Ishibashi is a Japanese composer, producer and singer-songwriter whose work has ranged from acclaimed solo albums to scores for film and television to improvised music settings. She is equally comfortable composing quirky pop, modern classical music and prog to the extremes of improvisational jazz and noise. ​Ishibashi is also a valued collaborator, working with artists including Keiji Haino, Charlemagne Palestine, Merzbow, Akira Sakata and Jim O’Rourke.

The performance takes place in the Gallery’s entrance court and inside the Japan supernatural exhibition, with time included to explore the exhibition once the performance has ended

Complete lockout - latecomers will not be admitted

Join waitlist via the Sydney Festival