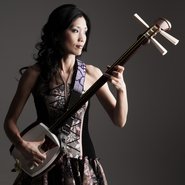 Noriko Tadano is an award-winning, virtuoso master of Japanese shamisen (a 3-string, banjo-like instrument) and a traditional Japanese vocalist, who has performed all over the world. Noriko’s ability and drive to cross over between traditional and modern Japanese music have recently seen her perform with renowned world musicians as well as traditional Japanese artists. Noriko also performs traditional Japanese folk songs (Minyo) which depict the life and feelings of 'older’ Japan, centering on the themes of love, family and the close connection with nature.