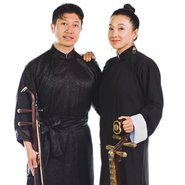 Treat your ears to a live performance by virtuosic musicians Nicholas Ng and Lulu Liu from the Sydney Conservatorium of Music as they traverse Chinese classical and contemporary repertoire on traditional Chinese instruments, the pipa and erhu.

Lu LIU (Lulu) 刘璐 is an internationally- renowned virtuoso on the pipa (4-stringed Chinese lute). She is a graduate of Shenyang Conservatory of Music and China’s Central Conservatory of Music. Lulu has performed extensively in China, Japan, Singapore and Hong Kong. Career highlights include featuring in On the wire (BBC Radio), Play me a story – Nutcracker at Sydney Opera House, and appearing before an audience of 7000 at the World Peace Outdoor Festival in South Korea. Lulu has released two solo albums, three collaborative albums and performed on the soundtrack of Mao’s last dancer.

Dr Nicholas Ng 黄建文 is a composer and performer who connects with the ancient past through traditional and contemporary sound. Nicholas has appeared at Kunstenfestivaldesarts (Brussels), Alkantara Festival (Lisbon) and numerous festivals in Australia. He recently featured in the ABC Compass documentary Divine rhythms. Heard on ABC radio and published by Orpheus Music, Nicholas has written for The Song Company, Melbourne Symphony Orchestra, and Contemporary Asian Australian Performance (CAAP). Nicholas teaches erhu and harmony at the Sydney Conservatorium of Music.