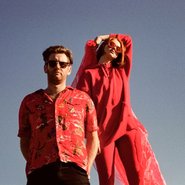 leftprojects is a collaborative electronic project featuring producer/guitarist Jono Graham and vocalist Sarah Corry. leftprojects artfully bridge the divide between organic and electronic, hip hop and jazz, alternative and popular, occupying a sonic space of their own.

Join us at Art After Hours every Wednesday through January to be swept away by some of the best of Sydney’s electronic sounds.