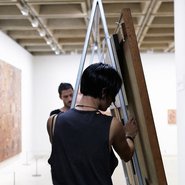 For the 20th Biennale of Sydney: The future is already here – it’s just not evenly distributed the Art Gallery of NSW is transformed into the Embassy of Spirits.

Specially commissioned for the Gallery as part of the Biennale, ghost telephone is a month-long daily chain performance, comprised of new interlinked works from a set of internationally renowned artists.

Working in situ, the artists will channel and transform the spirits of existing works in the Gallery’s collection and displays. Each artist will spend a period in residence with a selected artwork, attuning to its resonances and mutating its immaterial affects through their creative actions and words. The residency of each artist will overlap with another artist, generating new correspondences and reverberations between the artists and their work.

Performances will take place at different times of day and move across the galleries throughout the month.

The curator of ghost telephone, Adrian Heathfield, is a curatorial adviser and one of 13 attachés working alongside artistic director Stephanie Rosenthal to shape the 20th Biennale of Sydney.

For ghost telephone, Hahn Rowe has created a sound score in relation to Sidney Nolan’s painting The galaxy 1957–58, which depicts a spectral march of figures across a cosmic void. Together they will circulate from the Gallery’s ‘transit room’ (where works of art are traditionally prepared for entry to and exit from display) through the ground-floor galleries, in a sonic procession created by Rowe and enacted by the institution’s art handlers. Moving through 19th, 20th and 21st century collection displays, Rowe’s intervention takes Nolan’s painting on a journey through time to open up striking relations with other artworks.

Hahn Rowe is an internationally acclaimed violinist, guitarist and composer. His scores for performance have won three Bessie Awards. His long-standing collaboration with Brussels- and Berlin-based choreographer Meg Stuart (Damaged Goods) has resulted in the creation of seven evening-length dance-theatre works. He has also created scores for choreographers Benoît Lachambre, Louise Lecavalier, John Jasperse, Simone Aughterlony and Antonija Livingstone. As a musician he has worked with Glenn Branca, Foetus, Swans, Ikue Mori, REM, David Byrne and Moby. He has engineered and produced recordings for Bill Laswell, Roy Ayers, Antony and the Johnsons and Yoko Ono, among many others. Rowe has created scores for films such as Clean shaven by Lodge Kerrigan, Spring forward by Tom Gilroy, Married in America by Michael Apted and Sing your song by Susanne Rostock.

For ghost telephone, dancer Chrysa Parkinson is working and performing for four hours each day in resonance with a renowned artwork in the Grand Court display of 19th-century European art. Parkinson explores the capacities of embodied memory and dance to invoke absent figures. How can you call what is ethereal or not here into presence and language, and make it move again?

Chrysa Parkinson is a dancer whose recent works include performances with Boris Charmatz, Jonathan Burrows, Mette Ingvartsen and Rosas/Anne Teresa de Keersmaeker. She was a member of ZOO/Thomas Hauert from 2001 to 2010, and has also worked with Philipp Gehmacher, Eszter Salomon, John Jasperse, Deborah Hay, Alix Euynadi, Meg Stuart and David Zambrano. She was a member of Tere O’Connor Dance from 1987 to 2002 in New York, creating yearly premieres and touring internationally. While living in New York she also performed with Irene Hultman and Jennifer Monson, among many other artists. During that time she taught at Movement Research and at NYU’s Tisch School of the Arts, worked for The Field (a peer-based learning and support program for artists from various fields), and studied dance and somatic forms with Barbara Mahler, Irene Hultman, Simone Forti, Lisa Nelson, KJ Holmes, Jocelyn Lorenz, Marjorie Mussman and Cindi Green, among others. Parkinson was awarded a Bessie for sustained achievement as a performer in 1996.

For ghost telephone, choreographer and artist Philipp Gehmacher spends three hours every afternoon within the installation of Daniel von Sturmer’s Material from another medium (sequence 2) 2001, testing notions of movement, physicality and sculpture. Gehmacher investigates where the material of an artwork ends and the context begins. What kind of material is his 41-year-old body and how can it move in relation to other kinds of matter?

Philipp Gehmacher is a choreographer, dancer and visual artist whose works on gesture, space and touch have featured in numerous festivals and venues around the world. He has collaborated across art forms, most importantly with the choreographer Meg Stuart. Since 2008, Gehmacher has been developing the lecture performance series walk+talk, which investigates language, address and expression. He has created exhibitions and video works since 2011 and his current focus lies on working with objects and materials and conceiving walk-in spaces. Since 2014 Gehmacher has been a member of the Sculpture and Space class at the University of Applied Arts, Vienna. He has received the renowned Jerwood Choreography Award and the Austrian Advancement Award for Dance from the BMUKK.

For ghost telephone, artist and choreographer Benoît Lachambre will work and perform for three hours every day in relation to a sculpture and installation by Doris Salcedo. Drawing lines of connection between his moving body and Salcedo’s works, Lachambre investigates how what is absent or lost is carried through the flesh. In a slow-time dance, Lachambre charges the space between bodies and artworks and awakens the senses.

Benoît Lachambre is a renowned artist and choreographer. He has created 15 works since the foundation of his company Par B.L.eux. He has also participated in more than 20 productions by others and was the choreographer of 25 commissioned works, such as I is memory (solo for Louise Lecavalier in 2006) and JJ’s voice (for Cullberg Ballet in Stockholm in 2009). In 2013, he created High heels too, a new choreography commissioned by the Cullberg Ballet.The same year, Lachambre received le Grand prix de la Danse de Montréal 2013, for the work Snakeskins. In 2014, he received the Best Choreography award from the Conseil des arts et des lettres du Québec, for Prisms (a work commissioned by Montréal Danse). His latest work, Hyperterrestres, a co-production with French choreographer Fabrice Ramalingom and composer Hahn Rowe, had its North American premiere during the Festival Transamériques in Montréal in 2015.