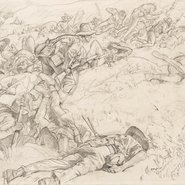 Marking the centenary of the Allied landing at Gallipoli

On Sunday 25 April 1915, Anzac troops began landing on the Turkish coast at Gallipoli (Turkish name, Gelibolu) in what has become a defining campaign of World War I.

This symposium brings together leading Turkish and Australian academics to explore the impact of that event on Australian and Turkish art, architecture and material culture and to critically assess the role of visual culture in mediating the conflict’s significance within both polities.

By creating a dialogue between Turkish and Australian scholars, the symposium aims to encourage new approaches to the narrative of an event of shared national significance. Participants will explore a range of themes including loss, memory and memorialisation, cultural identity and cross-cultural contact. The scope of inquiry into the role of visual culture will range from national myth to personal memory, from high art and public modes of performative commemoration to the everyday.

9.10am
Andrew Yip, Art Gallery of NSW and University of NSW
Curating Gallipoli: a century of exhibition

9.40am
Gizem Tongo, Oxford University
The aesthetics of the unknown soldier: Gallipoli paintings in the Ottoman Empire and early Turkish Republic

11.40am
Ryan Johnston, Australian War Memorial
Historical representations of the enemy in a contemporary global context: the recent public reception of Wallace Anderson’s 'Evacuation’ (1925) in Turkey and Australia

11.50am
Shaune Lakin, National Gallery of Australia
‘That famous image’: with the naked army at Gallipoli

As part of the symposium, keynote speaker Timothy Barringer will present a lecture at the University of Sydney on Thursday 21 May, entitled Empire mourning: the Patcham Chattri and the architecture of imperial ambivalence.

Image: George W Lambert Cartoon for 'The charge of the 3rd Light Horse Brigade at the Nek’ 1920 (detail)

Related exhibition: Mad through the darkness