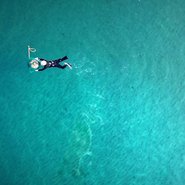 In association with In one drop of water

Join us for a special screening of Breathing underwater, an in-depth documentary depicting the life of haenyeo, the women divers of Jeju Island in South Korea. Shot over seven years by director Ko Hee Young, the film follows a group of women who dive without oxygen tanks and rely on age-old breathing techniques to bring sea treasures to the surface. This 1,500 year-old cultural practice was inscribed on the UNESCO List of Intangible Cultural Heritage in 2016.

Tickets can be booked in advance online via Qtix from 22 August, 10am.

Limited tickets may be available outside the Centenary Auditorium from 1 hour before each screening. Please arrive early to avoid disappointment.

Related exhibition: In One Drop of Water