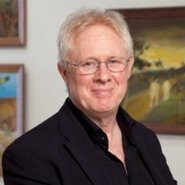 Hear from Barry Pearce, Emeritus Curator, Art Gallery of NSW, in conversation with Alec George, Coordinator, Brett Whiteley Studio, as we celebrate the 25th anniversary of the Studio’s public opening.

Together they discuss the history of the Brett Whiteley Studio- how it came to be, what it was like then, and what it has come to be now.