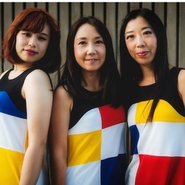 TV and radio presenter Yumi Stynes chats with Japanese alternative rock goddesses Shonen Knife as they take a quick break from touring the country with Regurgitator. Famously one of Kurt Cobain’s favourite bands, in 2019 the trio charges ahead towards their 4th decade of international touring and recording with their 19th studio release “Sweet Candy Power”.

Since their pure DIY beginnings in 1981, Osaka, Japan’s Shonen Knife have been building a faithful following of music enthusiasts and the alternative rock elite. Their relentless journey secured the band’s place as one of the pioneer ambassadors of Japanese rock music and culture on the international stage. A unique opportunity to catch a glimpse into this legendary bands candy pop-punk world, the interview will be followed by a live music performance.

Yumi Stynes is an Australian writer, television and radio presenter and massive art fan. She is the co-host of KIIS FM’s 3pm pick-up radio show and presenter of the ABC’s blockbuster podcast Ladies, we need to talk.