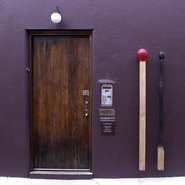 In 1985, Brett Whiteley bought the site at 2 Raper Street, Surry Hills, where he worked and lived until his death in 1992. In February 1995, it was opened as a public museum, now managed by the Art Gallery of NSW.

Join Wendy Whiteley as we celebrate two decades of the Brett Whiteley Studio. As well as viewing the current exhibition Alchemy-pop, visitors can learn more about the Studio and Brett’s life and work.

Highlights of the day’s program:

1pm
Barry Pearce, emeritus curator of Australian art, Art Gallery of NSW, discusses the notion of studios and their importance to artists

1.15pm
Stuart Purves, director of Australian Galleries, talks about his friendship with Whiteley

Free admission made possible by