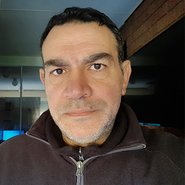 Artist Khaled Sabsabi and museum director Aaron Seeto discuss the power of the collective and its manifestations in politics and sport.

Drawing on his exhibition A Promise, Sabsabi shares his ideas of spiritual belief, politics and conflict. A Promise presents major works by Sabsabi that ruminate on the complex relationship between self and other. It includes large-scale immersive time-based works from the Gallery’s collection – such as Organised confusion (2014), which explores heightened states of fanaticism and transcendence among Western Sydney Wanderers football fans – alongside new paintings that evoke the politics of person and place.

Khaled Sabsabi was born in Tripoli, Lebanon and migrated with his family to Australia in 1978. He began his creative life in the 1980s as a socially engaged hip hop artist which evolved into visual artmaking in the early 2000s. Khaled sees art as an effective tool to communicate and converse with people. Through this familiar language, he creates immersive mixed-media and site-specific experiences. Sabsabi has worked in detention centres, schools, prisons, refugee camps, settlements, hospitals, galleries and public spaces in both Australia and internationally. He makes work that questions rationales and complexities of nationhood, identity and change, with continual transfer between the material and the philosophical.

Aaron Seeto is the director of the Museum of Modern and Contemporary Art in Nusantara (Museum MACAN). Based in Jakarta, Indonesia, Museum MACAN houses a collection of Indonesian and international modern and contemporary art; is focused on stimulating art education and art appreciation across the community, and presents exhibitions drawn from its collection, as well as in collaboration with partners across the globe. He was formerly curatorial manager of Asian and Pacific Art at the Queensland Art Gallery | Gallery of Modern Art in Brisbane. For eight years prior, he was the Director of Sydney’s 4A Centre for Contemporary Asian Art.