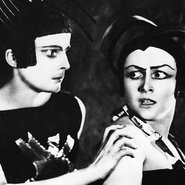 The first Soviet sci-fi film is an extravagant utopian fantasy. In Moscow, all radio stations receive a mysterious transmission: ‘Anta… Odeli… Uta’. This cryptic message leads engineer Los (Tsereteli) to begin work on a spaceship. Los fantasises about travelling to Mars, falling in love with its queen Aelita (Solntseva) and leading a Marxist-Martian revolution. Alexandra Exter’s cubo-futurist costumes and Isaac Rabinovich’s constructivist sets are a marvel of geometric forms, gleaming antennae and metallic bras. In the weeks leading to the film’s premiere in 1924, leaflets with the mysterious missive ‘Anta… Odeli… Uta’ fell from the Moscow skies. The PR stunt paid off. Aelita was a box-office hit before succumbing to the Soviet censors who banned the film as ‘alien to the working class’. The film inspired Fritz Lang’s Metropolis (1927) and remains a dazzling cinematic experience.

This is the opening event of our new film series, Cosmic futures, in conjunction with the exhibition Masters of modern art from the Hermitage.

Lucy Phelan is a musician and sound artist working in areas of production, live performance and installation. For the past 15 years, she has played music under her own name, as well as various guises including Lucy Cliché and Loose-y Crunché and collaboratively with Half High, Naked On The Vague and Knitted Abyss. She has performed in Australia and internationally at notable events and festivals including Vivid, Splendor in the Grass, Laneway, Super Sense, Tusk and the NowNow.

Using an all hard-ware set-up, Lucy’s sound sits within an experimental electronic territory from the harsh and industrial to the ambient and serene.

Related exhibition: Masters of modern art from the Hermitage