What’s on Art After HoursMusicYouth 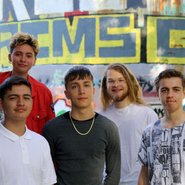 Presented by the Youth Collective

The 902 brings a fresh new sound with zest and spice. They are a young high school 5-piece band from Sydney’s west with a fusion-esque sound of rock, funk, jazz and alt pop.

Formed by chance after a jam at school, their sound is a fiery inferno of funk and groove. Unstoppable outside the odd assessment and exam, they have been playing and performing across Sydney for nearly 2 years. Described as a 'highly original creative diverse collective’, their original songs span many genres and influences, including the best in alternative, Australian, classic rock and new music.

Catch the energetic soulsters on the Art After Hours stage, brought to you by the Youth Collective.