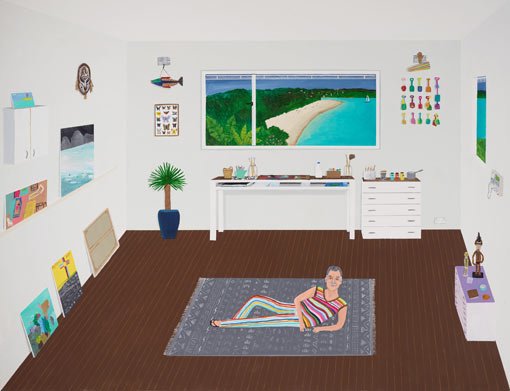 Last week, we introduced you to the prize-winners in the 2016 Archibald, Wynne and Sulman exhibition.

They’re just a few among a host of first timers this year, including 20 of the 51 Archibald artists, who have never been selected for any of the three competitions.

Many are younger or emerging artists, but others are much better known, such as Graham Kuo, whose works can be found in all major public collections in this country, including in the Art Gallery of NSW.

Self-taught artist Marc Etherington – who debuted in 2015 with a portrait of Del Kathryn Barton and her dog – is back in 2016 with works in both the Archie and the Sulman.

Maestri painted his friend David Griggs who, in turn, has a work in the Archibald.

Etherington painted Ken Done, who happens to have his own work hanging in the Wynne.

Luke Sciberras too is both a finalist in the Wynne and a sitter for the Archibald.

Perhaps it should come as little surprise that artists – particularly self-portraits – were the most popular subjects for Archibald portraits.

But when it comes to popular sitters, this year’s winner Barry Humphries is a perennial Archibald favourite. He first appeared in a John Brack portrait in the 1969 competition as Mrs Edna Everage (she wasn’t made a dame until 1974). He appeared again in 1976 in a portrait by Charles Billich; in 2000 as Sir Les Patterson, painted by Bill Leak; and twice in 2014 as himself in a Rodney Pople painting and as Sir Les again in Tim Storier’s Packing Room Prize winning picture. He’s even been name-dropped in other artworks, such as Davida Allen’s 2003 painting Philip Bacon, art dealer, reading a letter from Barry Humphries and Peter Churcher’s 2005 portrait of Jeffrey Smart who is wearing a jumper that Humphries knitted him as a gift.